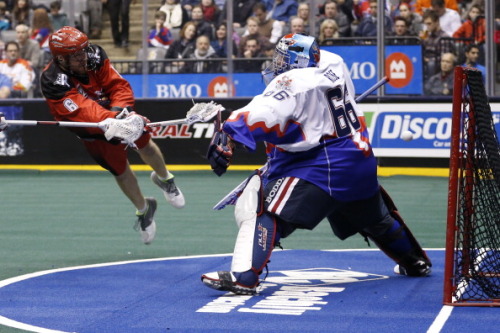 Toronto Rock goaltender Nick Rose was all smiles after his team’s first win of the season Friday night, a night on which he also made team history.

Rose’s empty net goal at 13:43 of the fourth quarter was the first ever goal scored by a Toronto Rock goaltender. A goalie goal.

It was the insurance marker in a 14-12 win over the Buffalo Bandits, the first time the Rock have tasted victory in 2016. Cheering and clapping could be heard from the locker room after the game ended.

Rose was named the first star of the game for his goal and 38 saves. He made some timely stops throughout the game and was, pardon the pun, rock solid in the fourth quarter after his team took a 14-11 lead late in the game. As time wound down, the crowd got on their feet and chanted “Rosey! Rosey!”

“That was a pretty awesome moment,” Rose marvelled. “I was more happy that we were able to seal the deal though and that’s kinda when I knew it was over and I could ease up a little bit and enjoy that one. That was an awesome moment; I’m glad our fans are still behind us and they were great tonight, loud and proud and that’s what we need going forward.”

Buffalo had pulled their goaltender for an extra attacker and had no one in their defensive end. After making a save, Rose tossed the ball up the floor, where it rolled into an empty net. Kevin Brownell tried his hardest to chase the ball down but it was in the net before he could reach it.

“Honestly I threw up a bit of a prayer there,” Rose said. “I kinda looked right and nobody there, and looked left, nobody there. I just knew we were getting close to eight seconds there so I just launched it and I’m grateful I was able to put it in the net. I’m just glad that kinda helped us put them away because they were still coming on even after that.”

Kedoh Hill scored one more on Rose to bring the Bandits within two but they were out of time.

Both Rose and head coach John Lovell chuckled when asked if they thought about letting in one more to give Rose credit for a game winning goal.

“If I’d had a chance I might have given them one more for a game winner but no, I just wanted those two points too bad,” Rose smiled.

“We were kinda hoping that they’d get one more and we’d hang on so he’d not only get the win but the GWG,” Lovell joked.

Goaltenders scoring is a rare occurrence. It’s happened only 15 times in the history of the NLL.

Rob Blasdell scored four in his career and Pat O’Toole three. Tyler Richards was the last goaltender to score, in 2015 for Vancouver. Prior to that the league hadn’t seen a goalie goal since 2009.

Most, if not all, find the back of an empty net. But for a goaltender to launch the ball the length of the field with accuracy in high pressure situations takes great athleticism. It’s always a treat to see the feat accomplished, and the Toronto fans went home

Rose is going to hold on to this memory forever.

“I got the ball, I’ll put it in a special place but I’m a bit happier with the two points than the goal,” he said.

Toronto has also never had a goalie goal scored against them.