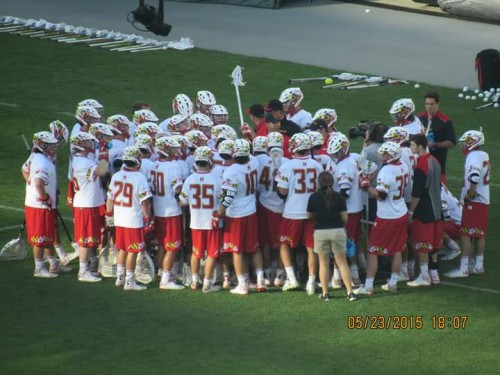 This has been an incredible year of lacrosse. For me, it is always interesting to look back at the start of the year and compare the results. I started looking back at the polls throughout the year and compare them to the end results. For simplicity’s sake, let’s just look at the Media Poll and leave the USILA Coaches poll out of the conversation. The preseason poll looked like this:

Obviously the voters had Denver figured out as the Pios took that top spot and will play in the Championship game. How about Maryland? The voters had the Terps at the ten spot. Throughout the season I thought Maryland was a 5-10 team, but in the Tournament the defense looked fantastic and pushed Maryland through to the finals. Then there is Albany which started in the 11th position and finished with a loss to Notre Dame in the quarterfinals. The emergence of attackman Connor Fields really aided the Greyhounds, but it was the defense that stepped up in the post season. In fact, only two of the top five teams in the preseason poll made it to the Final Four.

Say what you will, but in college lacrosse there are three “power” conferences: Ivy, ACC, and Big Ten. Out of those three, the ACC looked the best heading into the Tournament. All year we gave so much credence to the ACC, and labeled it the best conference in the land. Yet as the year comes to a close, the conference has to be disappointed with its performance. Of the five ACC schools, only two looked like Championship contenders in the post-season. Syracuse fell to Hopkins in a game could have gone either way, but incredibly poor officiating and a bad defensive performance for the Orange pushed Hopkins on to the Final Four. The Irish made it to Championship Weekend, and put forth a valiant comeback against Denver to take the game to overtime, but Sergio Perkovic’s five, fourth quarter goals just weren’t enough. I don’t think we can blame either of those teams for its losses. Notre Dame ran up against the best team Denver has ever fielded. Syracuse, on the other hand, went up against its all-time rival and put forth a strong effort. As for the other three schools, I don’t think anyone can say that the final games were good showings.

If you thought the ACC had a disappointing post-season, take a look at the Ivy League. Not one of the Ivy teams won a game. At least Yale took Maryland to a one-goal game, but Brown and Cornell both got trounced in the first round. I would say that Princeton has a case to say that they should have made the Tourney, but the Tigers dug their own grave at the end of the season.

Finally, we have the Big Ten. Three B10 teams made the Tournament, and the biggest surprise has to have been Ohio State. The Buckeyes have begun to emerge as an actual power in college lacrosse, and that is a good thing for the game because it creates a good blueprint for other big time schools to start up programs. Maryland was a surprise for me as well, I did not expect the Terps’ defense to be so good. Then there is Hopkins, a team that was not even ranked for several weeks during the season. Nevertheless, the Hop took advantage of a defensively weak Syracuse team in the quarterfinals to make it to Championship Weekend.

Here is what I find so interesting. All year we have spoken about the dominance of the attack position this season and how offense was winning the day. Yet, here we are with the #1 scoring defense versus the #5 scoring offense in the country facing off for the championship game. The top three teams in terms of scoring offense fell in the quarterfinals and the fourth and sixth best teams for scoring offense, Duke and Brown, fell in the opening round. While Maryland held UNC’s impressive offense to just seven goals, Yale, a team that ranks ninth in scoring defense, fell by only a goal to the Terps. So what does this mean? It means that if the trend continues the most important matchup on Monday won’t be the DU offense vs. the Maryland defense, but the DU defense vs. the Maryland offense. The Pioneer defense will really have to step up if Denver has a shot. While high scoring attack lines may have been enough during the regular season, it is the defensive side of the field that is most important when playing Maryland.