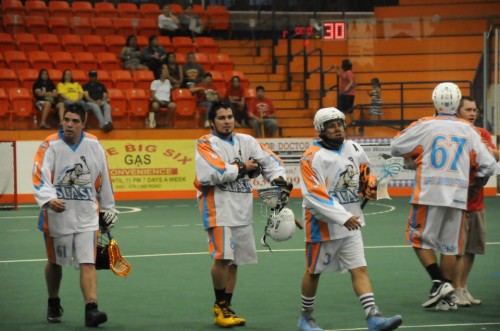 So far, the Six Nation Slash have had a great start in their Can-Am Senior B lacrosse season.  The season started off with a tough overtime game, which the Slash lost 7-5 against the Onondaga Redhawks but the Slash came back in the second week and beat Pinewoods 10-9, which started a six game win streak.

In the streak, Tuscarora, Native Sons, Allegany, and Buffalo Creek were the teams the Slash took down. In both meetings vs. Buffalo creek the Slash scored a combined 49 goals in both those contests Kyle Jamieson led the team in points to lead his team to victory.

In week six the Slash were on the road and short players but fought hard as Tonawanda walked away with the 11-10 win.  Just a week later the Slash were at home at the ILA ready to show Tonawanda that they are not the better team. The Slash jumped out to an early lead as Ken Aaron played a solid game on offense and defense as well as getting some stellar defensive play from Jamie Downie who also scored a goal.  The Slash never looked back winning 14-8 and getting their seventh win on the year.

This past weekend in the teams first meeting with the Newtown Golden Eagles the Slash were on the road and showed they will not going give up with out a fight. After a first period that saw Slash goalie Casey Hill make a ton of great saves, the Slash offense got goals by Ryan Ferizovic and Jeff VanEvery.

They were only down 3-2 after the first period. After the second, however, the team was down 10-5 but would not give up in the third period as Cody Laforme, Darcy Powless, Michael Holmes, Jody Pembleton JR scored goals. Also Russ Davis who takes draws and is a big offensive threat helping his team not give up only losing 14-10.

Some other players that have played big roles on defense this season are Tait Johnston, Brendan Morrison along with Kevin and Tyler Bomberry.  Also Rochester Knighthawks draftee Brandon Styres has been a brick wall in net.

Next the Slash will be back on the road as they take on the Onondaga Redhawks at 7:00pm Saturday.