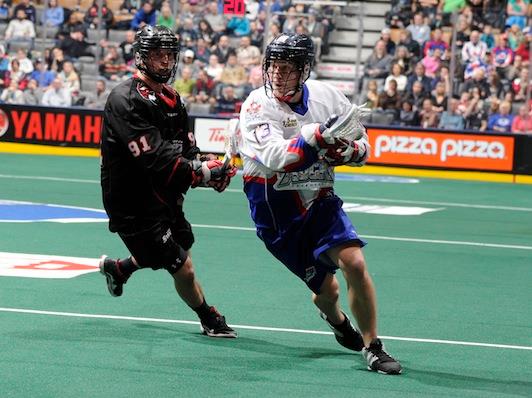 The Vancouver Stealth have enhanced their local appeal once again after another massive trade that will bring offensive dynamo Garrett Billings to the black and red.

Announced earlier this morning by general manager Doug Locker, the Stealth have moved Tyler Digby and a second round pick in the 2017 NLL Draft to the New England Black Wolves for one of the league’s best setup men. It’s a move that further ages the overall roster of the Stealth, but one that was necessary to make given Digby is living in the States and likely would be missing from a lot of Stealth action. Vancouver seems ready to deal with an overloaded left side at this point, despite it coming with some interesting caveats.

The move gives Billings a chance to move back to his hometown of Langley, where he has played with the Thunder in the summers. He currently plays in the B.C. men’s field lacrosse circuit, where he regularly piles on points and is able to stay in shape and fresh for the winters. Everything was set for him to come back home, it feels like, and the Stealth are going to benefit from that move.

Although he has had major knee surgery in the past, that isn’t as big of a concern as it was even 10 years ago with the emergence of better treatment. Giving up a second-round pick won’t affect the Stealth long-term as the pick isn’t until 2017 and they have eyes on developing players if prior history is any indication. They’ve built their team to compete now in order to give them a puncher’s chance of staying in the lower mainland and can’t let what should be a lower-end pick dictate sitting on their hands when they can make their team as good as possible.

Before last season, Billings scored 30-plus goals in five straight seasons. In 78 games he scored 158 goals and an amazing 315 assists. Bottom line: there aren’t many players that produce offense in the same stratosphere as Billings. In that time span, he also added 55 power play goals, and 99 helpers. Last year was the first season in that span where he didn’t shoot over 10 per cent—he was 5.7 per cent on on 87 shots with New England last season.

Billings is clearly one of the premier offensive leftys in the league and will have a noticeable impact on how Logan Schuss and Corey Small figure into the O. Billings played just eight games for New England but racked up 31 assists in that timespan; the Stealth will hedge their bets that the added passing ability of Billings takes a load off of Small in particular.

Small transformed himself into one of the league’s better offensive players last season and took that momentum into his fabulous WLA campaign with Mann Cup winners Victoria. The ball won’t have to be in his stick as much, allowing him to work more off-ball and down low with Schuss and letting Billings play the perimeter.

The move also takes pressure off of the right side, where Rhys Duch consistently demands top defensive assignments from teams. He racked up the points again last season, and given he won’t be stressed upon as much to be the bell-cow of the Stealth O, shouldn’t see his production dip as a result of the trade.

24-year-old Digby was coming into his own last season, using his 6-foot-3 220-pound frame to bully his way inside the 24 foot and scoring a career-high 38 goals in just his second season in the NLL. But there is always the possibility the Stealth would lose him, given he is living in the US and has ties there as he went to school at Robert Morris. With Joel McCready coming back for another season, however, it made Digby somewhat redundant.

It’s hard to argue that the Stealth lost this trade, despite giving up one of the more promising players in the league. It’s another example of Locker being proactive knowing that he has to produce a winner at some point. Billings will be a draw for fans to come to the LEC and Vancouver needs that in order to produce some excitement and attendance to the rink.

Although, I’m not so sure that we really need to be talking “faces of the franchise” right now though. They need to focus on winning games, not who’s going up on the outside of the building. Fans, as we know, are attracted to winning, and this gives Vancouver yet another player who has a proven track record of doing just that.