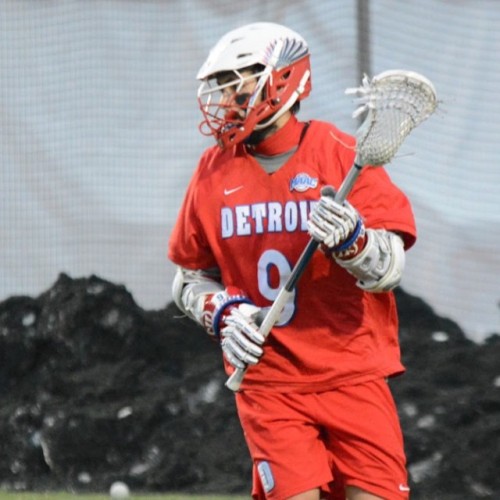 The Vancouver Stealth picked up a great player in this year’s draft with forward Shayne Adams from St. Catherines Ontario and Detroit Mercy. Adams not only had a very successful college career at Detroit where he was one of the best attack man in Division One lacrosse, but also in his Junior A career with his hometown St. Catherines Athletics and finished up playing with the Six Nation Arrows in 2012.

Since then he has played in the MSL for the Oakville Rock and the Kitchener-Waterloo Kodiaks. He also played for the St. Catherines Saints this past summer out of OLA Senior B—they were the host team for the President’s Cup where they finished in third place. I sat down with Shayne to find out more in depth about his lacrosse career and excitement on joining the Stealth and NLL this season.

Q: What was it like to hear your named called on draft night?

A: To hear my name called was a dream come true. In the back of your mind you’re nervous as nothing is guaranteed on draft day. To be picked in this elite class is a special feeling.

Q: What do you think you can bring to help the Stealth win this season?

A: I want to be a guy known for doing the little things right, each practice, shift, or game. Whether it be picks, loose balls, assists, goals, as long as I am helping my teammates end up with a win I’m happy!

Q: When you got hurt at Detroit Mercy you came back to finish off a very strong college career. How does that make you feel?

A: I owe a lot to the doctors and trainers at my school (University of Detroit Mercy). I got first-class treatment and that allowed me to bounce back the way that I did. It was a learning experience to not take anything for granted as my career could have been over years ago.

Q: Have you played a big part in recruiting the other St. Catherines players to Detroit?

A: I did with specifically Marcus Butters as we played junior and high school together but other than that I cannot take credit for any other recruits. Our Coach Chris Kolon does a great job giving Canadians the best chance to excel at the collegiate level. He is patient, and understands there is a transition period for Canadians never playing American style field lacrosse. Any Canadian should give this program a look, a lot of good things going on in the Motor City; it starts with the culture we built there.

Q: Would you relocate out to Vancouver for the winter?

I am starting by commuting but am looking into heading to Vancouver.

Q: Who has played the biggest part in supporting your lacrosse career?

A: I have to say my Dad has by far. Like any competitive father-son we sometimes butt heads over the years but I know that he brought the best out of me. There’s no better feeling than looking up in the crowd and seeing your parents smiling. I cannot thank them enough!