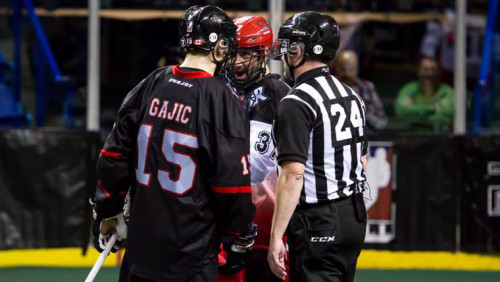 Ilija Gajic (Burnaby, BC) is coming off one of his most productive NLL Seasons in 2015 scoring 11 goals and adding 17 assists for a total of 28 points. The six year veteran also collected 87 loose balls and played in a variety of roles for the Stealth during the year. He was originally acquired by the Stealth from the Colorado Mammoth after the 2013 season.
Over his career Gajic has played in 86 regular season games scoring 45 goals and 61 assists, totalling 106 regular season points to go along with 529 loose balls.

“Ilija is coming off a strong season and we love everything he brings to our roster. He can play defense, run transition and play offence and also brings incredible energy and commitment. We are looking forward to an even bigger year from him in 2016,” commented team President and General Manager, Doug Locker.

Keegan Bal (Coquitlam, BC) played his Junior A lacrosse for the New Westminster Salmonbellies putting up 57 points in 16 games in his final season. Bal is currently in his third season with the New Westminster Sr. A Salmonbellies. A graduate of Lake Erie College, he was named the ECAC Division II Offensive Player of the Year and established a school record with 80 points in his final year of eligibility. He was originally drafted in the third round (25th overall) by the Toronto Rock in the 2013 NLL Entry Draft but opted to pursue his masters degree at the University of Durham in England.

“Keegan has had another really strong summer and has played extremely well in the post season this year. We have been very impressed and look for him to compete for a spot this coming season,” Locker continued.