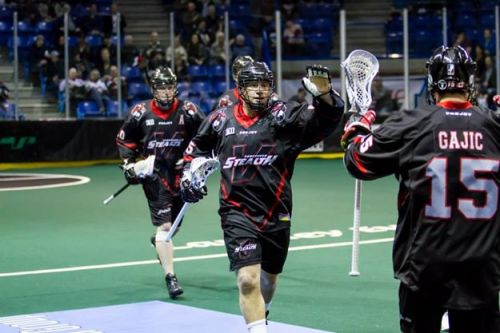 It may be too soon to suggest this was a season-saving win for the Vancouver Stealth, but an eight-goal run that propelled the Stealth to a 14-13 overtime victory over the Calgary Roughnecks may have done just that.

Corey Small scored the winner at 1:16 of overtime, capping off a first-star performance as Vancouver moved to 3-4 on the season with a pivotal win over the rival ‘Necks. Calgary moves to 3-5, a half game back of the Stealth’s third place spot,

Calgary had Vancouver on the ropes thanks to 6-0 first quarter and 8-3 halftime leads but couldn’t hold on as the Stealth scored those pivotal eight unanswered goals. It was only until Reilly O’Connor scored with the extra attacker with nine seconds left in the game to tie the game at 13 and push it to overtime.

The win was a huge boost to a Stealth club who have looked a lot better over the last few weeks, starting with a 14-5 win over Colorado and coming up just short in overtime last week in Rochester. Paced by the electric trio of Rhys Duch, Garrett Billings and Logan Schuss – who all had eight points in the game – the Stealth overwhelmed Calgary’s defence over the final two frames. In the second half (including overtime), Vancouver out scored the Roughnecks 11-5, a far cry from when Eric Penney was pulled for the recently re-signed Tyler Richards at 11:46 of the first and Vancouver down 4-0.

A loss would have had consequences for the Stealth given they already dropped a close decision in Cowtown just under a month ago. Vancouver is now 3-2 in divisional play, while Calgary falls to 1-4 with a huge game on the horizon next weekend when the Saskatchewan Rush come to town.

The Roughnecks couldn’t have asked for a better start to the game, going up 6-0 and then 8-3 off a ridiculous goal-of-the-year candidate by Curtis Dickson. Calgary was finding goals in transition and kept Vancouver to perimeter in the early going. It wasn’t until the score was 12-5 when Vancouver made their epic run with some big goals from Duch, Billings and rookie Jordan Durston.

Stealth head coach Dan Perreault singled out the team’s effort in the second half, obviously pleased with the reversal of fortunes. “We were hard on loose balls and rebounds in the later stages of the game, which turned out to be the difference for us,” Perreault said.

Tyler Richards was excellent in the second half in his return to the cage, making 31 saves on 40 shots overall. He replaced Penney, who allowed four goals on 11 shots in 11:46 of work. Penney hasn’t put together a string of consistent starts yet and his hot seat could be warming up if Richards continues to play well. Goaltending is the major question mark of this season for Vancouver, and the search for consistency in the cage is still an ongoing process, but Vancouver got the performance they needed from Richards and could go with him when they travel to Colorado next Saturday.