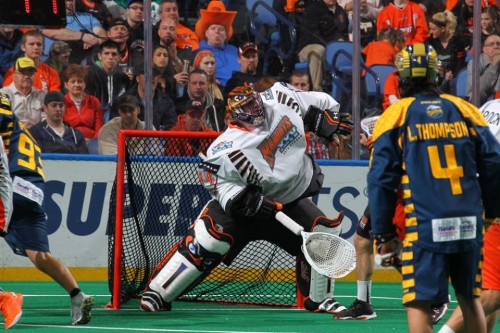 After walking away from the Air Canada Centre with a crushing 14-12 defeat at the hands of the winless Toronto Rock on Friday, the Buffalo Bandits (4-4) had little time for reflection as a possible series clinching win against the Georgia Swarm (4-4) was on the line Saturday night at the First Niagara Center.

With an incredibly strong eight goal performance in the fourth quarter by the Swarm leading to their 19-15 victory, they not only helped tie their season series with the Bandits at one win apiece, they also gained some important ground in the Eastern Division standings.

With the Bandits playing three games in six days, fatigue and roster depth were going to be big factors heading into Saturday’s game with the Swarm. After the game, Bandits head coach Troy Cordingley address tonight’s performance with “We just didn’t have any will tonight. We didn’t compete for loose balls and we just got outworked. Simple as that.”

NLL Player of the Month for January, Bandits forward Dhane Smith had another huge game against the Swarm as he led the team with eleven points (4G, 7A). Bandit’s rookie Anthony Malcom was second in team scoring with five points (3G, 2A). Both Mark Steenhuis (3G, 1A) and Ryan Benesch (2G, 2A) tied for third in team scoring with four points apiece.

For the Georgia Swarm, Jesse King led the way with seven points (3G, 4A) while Johnny Powless (3G, 3A) was second on the team with six points and Miles Thompson (2G, 2A), Jordan McIntosh (1G, 3A) and Randy Staats (2G, 2A) each recorded four points in the victory.

“Their Offense is very good and they might be the best in the league,” Cordingley said.” They move the ball really well and they have a lot of speed. They attacked us tonight and we were always a step behind.”

In the battle between the pipes, Zach Higgins came up with a huge game for the Swarm as he racked up 29 saves on 36 shots as he replaced struggling starter Brodie MacDonald (allowing eight goals on 21 shots) early in the second quarter.

For the Bandits, their starter Anthony Cosmo returned to the starting lineup after missing the last three games with a lower body injury. He also had a troubling time in net as he could only come up with 44 saves on 59 shots before being pulled in the fourth quarter for backup Davide DiRuscio.

During the conclusion of the third quarter, it was announced that Cosmo’s final save in the third ended up being a piece of NLL history in the making. Cosmo became the NLL all-time leader in saves by breaking Bob ‘Whipper’ Watson’s record of 6,741 saves.

After the game, Cosmo thanked all his former teammates by stating “The record is a credit to the teammates that I’ve had and played with over the years. It might be my record, but I’m just the recipient. There are a lot of other guys that have helped me battle to where I am today. I’m honored to have been a part of that group.”

In the first quarter it was the Bandits who dictated the play and they made their presence felt, especially with their special teams leading the way.

Malcom got the Bandits on the board first during their first power play of the evening with an in-close strike against MacDonald following a loose ball in front. The Swarm would retake the lead less than two minutes later with a pair of goals from King and Powless.

Smith would grab the 3-2 lead back for the Bandits with a pair of goals of his own with a high strike past MacDonald and his other coming from an errant pass from MacDonald (out of position and pretty far away from his net) that Smith picked off and ripped into the wide open net.

Fifteen seconds after MacDonald’s error, his teammate MacIntosh would score after doing a straight hard-fought charge to Cosmo’s net.

With the Swarm’s Mitch Belisle receiving a late first quarter five minute major penalty for checking Craig England from behind, it was the Bandits much improved power play this season to the rescue once again. During Belisle’s time served, Steenhuis and Benesch each recorded power play opportunities against MacDonald to give the Bandits the 5-3 lead heading into the second quarter.

The Bandits came out charging strong out of the gate once again in the opening two minutes of the second quarter. They would receive three goals from Smith, Steenhuis and Chad Culp before the Swarm finally had enough and benched MacDonald in favor of backup Zach Higgins.

Not letting the Bandits run away with the game on a four goal 8-4 lead, the Swarm would claw their way back into the game with a four goal run. Kiel Matisz got the first goal of the run with, two goals coming on the power play from Shayne Jackson, and Powless when Billy Dee Smith went to the box for a five minute illegal body check major and David Earl blazing a shot past Cosmo.

With the game tied up at 8-8 and five minutes remaining in the half,  the Bandits would counter with a two goal run coming from Mitch Jones (after a great pass from Smith) and Steenhuis (ripping a long distance shot past Higgins) to give the Bandits the 10-8 lead.

Georgia would begin the third quarter with their high octane offense going a two goal run of their own with Powless leading the way and Randy Staats getting one with a huge diving effort past Cosmo.

Daryl Veltman would help give the Bandits back the 11-10 lead with a diving effort of his own midway through the third, but Joel White would tie the game back up at 11 with a breakaway effort of his own for the Swarm.

Malcom would help finish the third quarter on a high note for the Bandits as they took the 12-11 lead on a solid stutter step deke of a goal past Higgins.

With the Bandits up one, the fatigue from playing three games in six days finally took their toll on the Bandits and they finally ran out of gas in the fourth as Georgia would take complete control from the opening faceoff till the end of the game.

With just 24 seconds after DiRuscio took control, the Swarm smelled blood and went for the attack again and Miles Thompson would score his second and final goal of the evening.

With the Swarm up 16-12 with plenty of time still left on the clock in the fourth, Smith would do his best to keep the Bandits close in it till the end. He ripped a goal past Higgins right shoulder to pull the Bandits within three of the Swarm’s 16-13 lead.

Unfortunately it just wasn’t enough as the Swarm would pour it on with three more goals coming from Jackson, King and Staats while the Bandits could only muster two more from Malcom and Benesch to end the night with the 19-15 loss to the Swarm.

Even though their record is now 4-4, Bandits head coach Troy Cordingley believes the past two games were truly a missed opportunity.

“We still have 10 games to play and we still have time, but we just didn’t play good lacrosse this weekend. We could’ve created separation in the standings, but this league is all about parity and if you don’t bring your “A” game for 60 minutes, you’ll end up behind the eight ball.”

The Bandits will be looking for their second road victory of the season as they face the defending NLL champion Saskatchewan Rush on Friday, February 26th at the SaskTel Centre in Saskatoon.