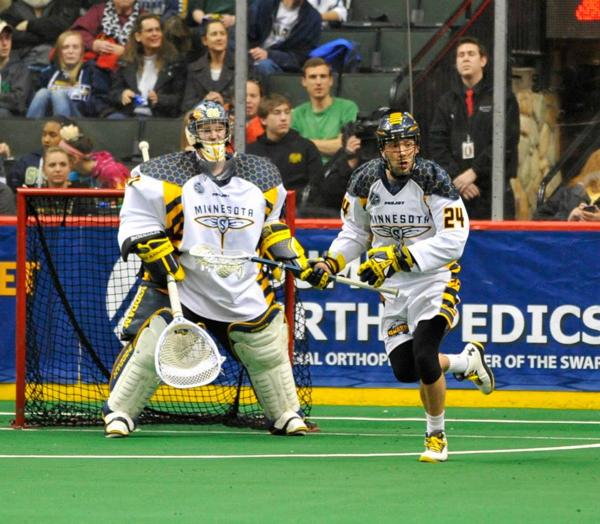 The Colorado Mammoth host the Georgia Swarm tonight at 7:30 p.m. MT to kick off the 2016 NLL season. Both teams made some changes during the offseason, so it will be interesting to see how things play out.

The Mammoth’s two biggest offseason acquisitions came from the Swarm. Star forward Callum Crawford adds depth and experience to an already-strong offensive unit that includes 90-point men John Grant Jr. and Adam Jones as well as all-rookie team forwards Jeremy Noble and Eli McLaughlin. Those five guys working together could quickly develop into the most dangerous offense in the league.

Meanwhile, Greg Downing should help to solidify a defense which struggled at times in 2015. Along with all-rookie Robert Hope and veterans Creighton Reid and Cam Holding, things out the back door should be much more stable for Colorado this year. Defending Transition Player of the Year Joey Cupido rounds out the group and can push the ball up the floor as well as anyone in the NLL.

Dillon Ward is entering his third year as an NLL goalie and should find himself in the top half of netminders this season as his game continues to mature. If he has a rough night, sophomore Alex Buque has demonstrated that he can step in and make big saves when needed.

After relocating to Gwinnett, GA from Minnesota over the summer, the Swarm went right back to business as usual in the front office, shedding veteran players in favour of drafting tons of fresh faces—at this point it just wouldn’t seem right to hold an NLL draft where the Swarm weren’t making four of the first nine picks.

This year they took Lyle Thompson first overall, to go along with brother Myles, who they grabbed in the draft a year ago. Together, the Thompson brothers set NCAA records for offensive output in Albany; the Swarm will be expecting more of the same in Georgia. Add in first rounders Jesse King and Randy Staats along with veteran snipers Kiel Matisz, Shayne Jackson, and Johnny Powless and you have the makings of a potent offense in Georgia. Even if it takes some time for the youngsters to figure things out, they should bring a lot of energy to the floor which will be fun to watch.

Georgia’s transition game has a lot of depth, with Jordan MacIntosh leading the way, along with veterans Joel White, Jason Noble, and Ethan O’Connor and rookie Chad Tutton. They’ve got a good balance of youth and experience at this position and should be able to turn the ball up the floor quickly and effectively as a result.

Alex Crepinsek and Mitch Belisle are the leaders on defense and are proven, steady defenders.

Zach Higgins is currently the lone goaltender on the Swarm roster, so Georgia needs him to be rock steady between the pipes and not get into injury trouble. He was seventh-best in the NLL in goals against average in 2015 (11.70) but he’ll need to keep improving if Georgia hopes to make a run at the payoffs this year.

The Swarm won twice in the preseason while the Mammoth went 1-2 in preseason action, suggesting that Georgia might have the edge in this one. I’m still going to go with experience over youth in a game that means something, however—look for Colorado to take this one in front of one of the biggest, most vocal crowds in the NLL.