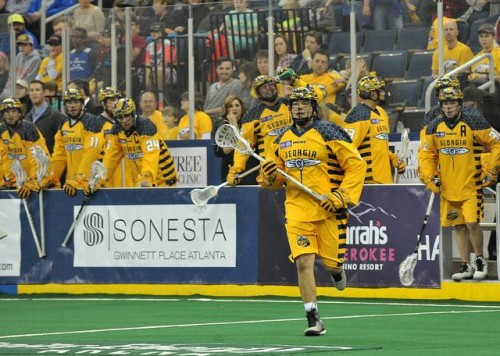 A 12-7 beatdown on the Toronto Rock in front of 9,087 fans made history as the Swarm played their first ever game at the Infinite Energy Centre in Gwinnett County. Johnny Powless was unstoppable, scoring four highlight reel goals and adding an assist as first star of the game. Randy Staats had a hat trick and four assists.

A five goal difference doesn’t usually mean a blowout, but the way the Swarm gelled together in the second period was a thing of beauty to the fans in the stands, many of whom were at their first ever lacrosse game. After a give and go first quarter, Georgia goaltender Brodie MacDonald shut down the Rock for a stretch of 39 minutes while the Swarm just kept scoring, building a six goal lead before Rob Hellyer popped a late one at 13:41 of the fourth quarter.

Powless’ goal at 3:38 of the third was a shortie that he tossed over his shoulder to beat Rose. Staats’ hat trick goal was a great individual effort goal in the fourth as he flew over the crease. Also scoring for the Swarm were Shayne Jackson (2), Jesse King, Jordan MacIntosh, and Kiel Matisz, who also had six assists. Both Thompson brothers, surprisingly, were each held to one assist.

Nick Rose wasn’t his usual sure self in the Toronto net; he was caught unmoving on several Swarm goals that shocked the veteran Rock defence. Penalties also hurt the Rock as they were shorthanded seven times. Georgia capitalized twice on their opportunities. The Rock were two-for-five on power plays.

Rose made 32 saves while MacDonald made 35.

Scoring for Toronto was Hellyer, with a hat trick, Stephan Leblanc (2), Rob Hickey, and Jeff Gilbert.

Frustration boiled over for the Rock in the dying moments of the game. Captain Colin Doyle dropped his gloves in an attempt to stick up for Kasey Biernes who had been harassed by Jason Noble. Later, Jesse Gamble threw some punches to the back of Joel White’s head while Brock Sorensen was involved in some pushing and shoving at the Rock bench. The Rock, with a largely unchanged roster from 2015, aren’t used to losing to upstart teams like the Swarm.

Youth beat experience in this game. The Rock will look to rebound at home next Thursday when they host the always dangerous Rochester Knighthawks for their home opener, while the Swarm will try to build a winning streak when they host the New England Black Wolves in a matinee on January 17.