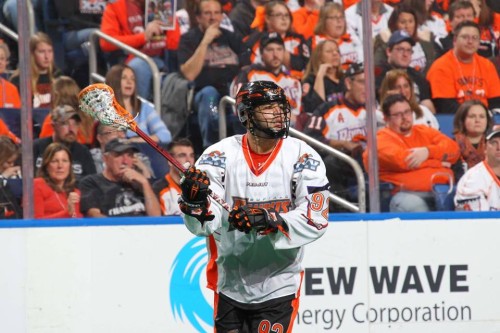 Last week I questioned the Georgia Swarm after their 16-15 loss to the Colorado Mammoth. Was that offensive output from such a young roster just a tease? Apparently, not so fast. The Swarm are just 1-1 on the season, but a 12-7 win over the Toronto Rock on Saturday night has left me more than a little impressed. Not only did the Swarm manage to put up 12 goals on Nick Rose and a stellar Toronto defense, but goaltender Brodie MacDonald, the second goalie for the Swarm, held the Rock to just one goal in the final 40 minutes. The defense has been what has been questioned the most in Georgia, so this showing could put some of that to rest. Randy Staats scored seven points in his second straight game while Johnny Powless scored four goals and played what was likely his best game since leaving Rochester before last season. A crowd of 9,000-plus saw the Swarm debut in Georgia, and for once, I will buy in and say their future may be bright after all.

Mammoth of an Offense

We already knew the Colorado Mammoth had a star studded offensive lineup, but scoring 16 goals in two consecutive games in the NLL is something else. Not to mention, in the second week of the season, the Mammoth put up that 16 spot on the Rochester Knighthawks and Matt Vinc, the best goaltender in the world. Adam Jones delivered with an eight point night while Callum Crawford did the same. Crawford, who faced injuries most of last season with the Swarm, looks like he could be that same player who put up 90-plus points two seasons ago. John Grant Jr. scored once but produced five assists. Jeremy Noble had five points, and even Eli McLaughlin scored two goals and looked like he was trying to strip Curtis Dickson’s title of Superman.

It really should not come as a big surprise that Shawn Evans had a good game this weekend. After all, he is coming off of an MVP season where he scored a league record 130 points. However, for the first time donning the black uniforms of the New England Black Wolves, Evans’ presence spoke of hope for the second year franchise. Not only did Evans have six points in the victory for the Wolves’ out in Vancouver, but he helped the team scored 17 goals. Vancouver are not exactly world beaters defensively and in the crease, but this development is huge for a team that struggled to score in all of 2015. Evans’ partner in offense, Kevin Crowley, also produced five points and Pat Saunders had nine. Saunders signed a three year deal this offseason after nearly ending up out in Buffalo, so for the Wolves it had to be a positive sign to see him start right where he left off.

After starting 0-6 last season, a 0-2 start for the Calgary Roughnecks cannot feel good for Riggers fans. Calgary has now suffered two close losses, both of which where they could not reach double digits in goals. This week was better for the studs of the Roughnecks offense, with five points from Jeff Shattler and seven from Dane Dobbie, but still just four from their offensive leader, Curtis Dickson. Calgary has only seemed to be able to get going on the power play, where they have seven goals this season in two games. Next week Calgary remains on the road in New England to face an inspired Black Wolves team.

With John Tavares now behind the bench, the Buffalo Bandits are in need of a new face of the team. Ryan Benesch is coming off of one of the best offensive seasons of any player in 2015, but that face of the franchise might be Dhane Smith. After bursting onto the scene last season with 107 points, Smith is ready to take over the Bandits as his team, at least offensively. He had five points in the win against Calgary on Saturday night and scored the game winning goal in the fourth quarter.

Bonus Observation: Evan Kirk had two assists in the game against Vancouver.