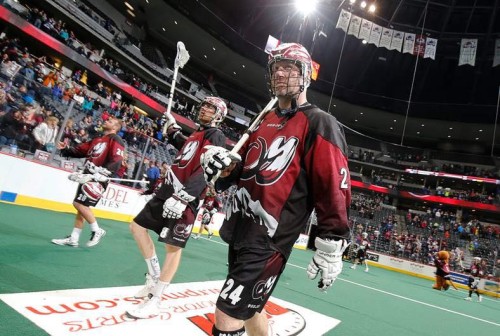 Billings will be playing his first game as a member of his hometown Vancouver Stealth, but he also faces his former team of half a season. Billings played for the New England Black Wolves for half of last year and was traded to the Stealth this offseason. He will be one of the leaders on offense, and it will be interesting to see how he works with the other Stealth star scorer, Rhys Duch.

Veltman is also making his debut with his new team, the Buffalo Bandits, and he will face his former team, the Calgary Roughnecks. Veltman is a part of a Bandits offense that is looking to replace John Tavares by committee, and he will be a part of that.

Grant is coming off of a great start to the season with a game winning goal to lead the Colorado Mammoth to a 1-0 start. Grant put up seven points in the victory last week, but the Mammoth have a tougher matchup in the Rochester Knighthawks than the Georgia Swarm were last week. Colorado has a dynamic offense, but it bears to be watched how they will do against one of the deepest defenses in the league.

After an impressive NLL debut, Staats will face a better defense in Toronto. The Rock are a more difficult matchup defensively than Colorado is, and after his strong start, Staats will be keyed on. Can he repeat his performance against a veteran defense, or will he slump in his second contest?

Evans is another player making his team debut as he plays for the Black Wolves after being traded there this offseason. Evans will no doubt be the quarterback of the offense, with Kevin Crowley playing with him there as well. How much will the New England offense improve after having one of the worst in the league last season? Can Evans come close to repeating his 130 point season?

The Rochester defense is a bit banged up, so right off the bat Hossack is going to be relied on. Hossack will have a big role on the Knighthawks defense against a good Colorado offense that put up 16 goals last week. Dylan Evans and Brad Self are both out, which will give the rookie Hossack more of a role than he would have had in his first pro game.

Penney is the man in the crease for the Stealth with the retirement of Tyler Richards. Penney played at times last season, and he also struggled with a weaker Vancouver defense in front of him. That defense is much improved, and the Stealth are putting their faith into Penney to be a starting goalie in this league. How will he fare against Evans and the Wolves offense?

Durston is one of the more underrated rookies from the 2015 draft class. It will be interesting to see what kind of a role Durston has in what is a deeper Vancouver offense. He is playing on the same side with Cliff Smith, Corey Small, and Logan Schuss, so how often will the rookie get the rock? That’s not even mentioning Billings and Duch playing on the right side.

Hellyer is healthy and he is going to be one of the leaders on offense for the Rock this season. Colin Doyle is healthy and Brett Hickey is coming off of a 50 goal season, but there’s no doubt that with Josh Sanderson out, a lot of the offense will run through Helleyer.