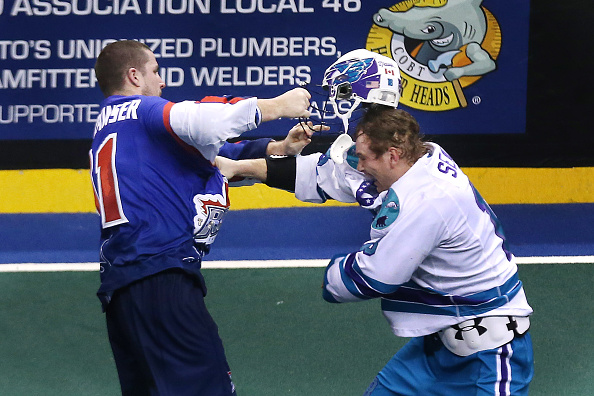 The Toronto Rock (0-2), a perennial contender for an NLL title, have scored 14 goals in two games this season. One of those losses came at the hands of the Georgia Swarm who had surrendered 16 goals the week before. The other loss? Also a Rochester team coming off of a 16 goal loss.

There have been five total goal scorers for the Rock this season; Rob Hellyer, Brett Hickey, Stephan LeBlanc, Kasey Biernes, and Jeff Gilbert. That means, after two games, captain Colin Doyle doesn’t have a goal scored.

“We’ve got to find a way to get there (near the goal),” Doyle said to the toronto Star. “I don’t care what it takes. We can’t live from the outside. We won’t compete in this league (if we don’t).”

That frustration was there after the week two loss to Georgia when Doyle dropped the gloves but Jason Noble clearly wasn’t interested. Doyle ended up with a five minute high sticking major to end the game.

Last night, we saw more of the same end-of-the-game antics from the Rock, who were more than willing to drop the gloves after the final buzzer. Billy Hostrawser went after rookie defenseman Derek Searle of the Knighthawks much after the contest had come to a close.

“There’s no reason why we can’t beat them,” he said after the game. ”We’ve put ourselves in a hole here. We’re 0-2 here. Two division losses, going into Rochester on Saturday night and six more division games staring us in the face.”

The last time Toronto started a season 0-2 was in 2007. This was the first time the Rock did not score double digit goals in back to back games since 2011.

Toronto is frustrated, and they’ve taken it out late in games when they already can’t come back. The team that has been together for so long finally looks old and misses the speed of injured players like Damon Edwards. From the top to the bottom, frustration is getting to this team, and if they lose again on Saturday, it can only get worse.