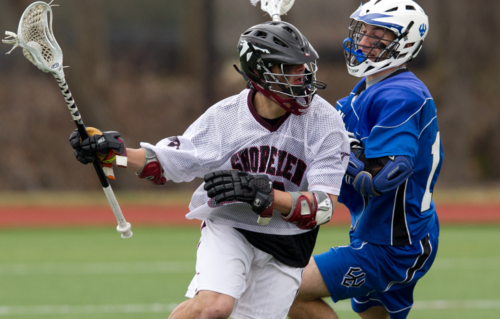 Overview: The Shoremen entered last season ranked 5th in Division III and voted as the unanimous favorites to repeat as Centennial Conference champions. Following their remarkable 18-2 season in 2014, the team fell down a tier, finishing their season just 6-10, coming short of the NCAA Tournament. The team will look to bounce back strong behind top returning scorers’ sophomore attackmen Tyler Powers and Tanner Barberi as well as senior midfielder Sid Looney.

Strengths: Experience- Offensively, the team loses its leading scorer in graduate Stephen Luck. But, three of the top four leading scorers return. Powers found the back of the net 12 times along with 10 assists. Barberi came second last season with 15 goals, and Looney scored 13 goals. Defensively, senior captain Brad Wollman returns for his finale after leading the team with 20 caused turnovers and 23 groundballs last season.

Weaknesses: Defense and Scoring- Both statistical categories took a crash for the Shoremen from the 2014 season to the 2015 season. The defense allowed 31 more goals in the 2015 season, in four fewer games. Scoring took a dive from 258 goals to 127. On average, the Shoremen scored 7.94 goals per game last season.

Top Returnee: It is tough to choose an outright top returnee for Washington College. There are many candidates that have the capabilities of leading the offense and defense. Look for Barberi to take control of the scoring.  Wollman slides into a leadership role as a senior captain and will have a huge part in protecting the net. Besides Wollman, leadership will be provided from senior midfielder Andrew Docktor and senior midfielder David McBrien. Docktor experienced an increase in playing time last season. McBrien is a two-time Centennial Conference Academic Honor Roll qualifier. These three senior will mentor their teammates on and off the field.

Breakthrough Player: Sophomore Tanner Barbieri had a solid freshman season. Barbieri scored 15 goals along with four assists. Along with his scoring contributions came with 33 groundballs and four caused turnovers. With these numbers as a freshman Barbieri shows great potential for growth.

The Shoremen open their season on Feb. 27 for a Saturday showdown when they travel to Washington and Lee.