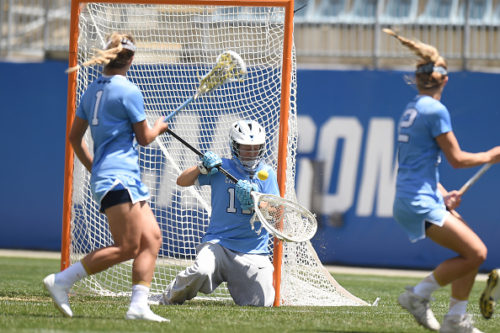 Three years ago, the North Carolina women’s lacrosse team ended Maryland’s bid for a perfect season, beating the Terrapins in the 2013 National Championship Game. That game went to triple overtime and was played at Villanova University, just outside of Philadelphia.

In the end, the result was the same, but the game didn’t have nearly as much drama.

The Tar Heels jumped out to a 6-1 lead, the Terrapins answered with five of the next six goals, but North Carolina responded with two goals in a 15-second span, on its way to a 13-7 victory.

“I am very proud of our players and coaching staff; they were gritty and tough all year,” said UNC head coach Jenny Levy.

Coming into Sunday’s title tilt, Tar Heels had played nine one-goal games, so they were used to adversity. That toughness would be tested. Maryland pulled within 7-6 less than seven minutes into the second half, but North Carolina didn’t lose its composure.

“This game had a feeling that it was tight, but I didn’t realize we won by six,” said Levy. “Congratulations to our team. They worked hard all year. There was one percent who believed we would win this game, and that one percent is sitting in our locker room.”

In the end, UNC went on a 5-0 run to turn a 7-6 lead into a 12-6 advantage, all but clinching its second national title in four years. In the process, the Tar Heels snapped the Terps’ 26-game winning streak while winning their 17th straight game themselves. The team’s 17 straight wins, and 20 overall wins, mark school records.

“Our defense played incredibly today,” said Ward. “They made it very easy on me. I think we only had three plays today where we got together and said something went wrong.”

After allowing five goals without a save in Friday’s semifinal vs. Penn State, Ward was right back between the pipes on Sunday.

“Meg is a senior and has been in this game before,” said Levy. “We also know that when Meg doesn’t play well, in the next game, she comes back to play really well. Knowing her connection with her senior class on the field was very strong, we like to tap into our players’ emotions and not get too technical in X’s and O’s, but how they feel that day.”

A big reason for UNC’s fast start was the play of Ward in goal, and the team’s play at the draw. Despite facing 2014 and 2015 Tewaaraton Award winner Taylor Cummings, the Tar Heels won eight of 11 draws in the first half. For the game, Sammy Jo Tracy posted a game-high six draw controls.

Maryland began to catch fire towards the end of the first half and beginning of the second. Megan Whittle scored her 74th and 75th goals of the season then Caroline Steele scored with just 13 seconds left in the first half to pull her squad within 6-4 after 30 minutes of play.

Whittle added her hat trick goal early in the second half, then Cummings followed to pull Maryland within 7-6 with 23:24 on the clock. Just under two minutes later, the Tar Heels scored at the 20:39 and 20:24 marks (goals by Carly Reed and Messinger) to take a 9-6 advantage, and they went on to score three more to erase any doubt.

North Carolina has consistently played Maryland competitively. Earlier this season, UNC dropped an 8-7 final, which still stands as its last defeat. Last season, the Tar Heels lost 13-11 in the regular season and 9-8 in the National Championship Game. In 2014, UNC earned a 17-15 win over Maryland, and of course, in the 2013 title game, the Tar Heels pulled out a triple overtime thriller.

“I think freshman year felt a lot different because we came in as freshmen,” said Ward. “This year Aly (Messinger) gave a ridiculous speech at halftime, which I think fueled everyone.”

“Every year, the team is different,” said Levy. “It all comes down to what they really want. Once everyone buys in, it doesn’t really matter what they’re like as long as they want the same thing. The 2016 team is owned by the 2016 team and they drove the bus this year.”

UNC advanced to the championship game by earning a hard-fought 12-11 win over Penn State. The Tar Heels used a 4-0 run to turn an 8-7 lead into a 12-7 advantage, but the Nittany Lions scored the next four goals to pull within 12-11 with 7:12 still remaining. However, no one could score the rest of the way as the Tar Heels survived the scare from the unseeded Nittany Lions. Carly Reed led the UNC offense with five goals.

In the second semifinal, the Terrapins opened a 10-3 lead over Syracuse and the lead eventually reached 10 as Maryland won, 19-9. Taylor Cummings and Megan Whittle each scored four goals for the Terps.