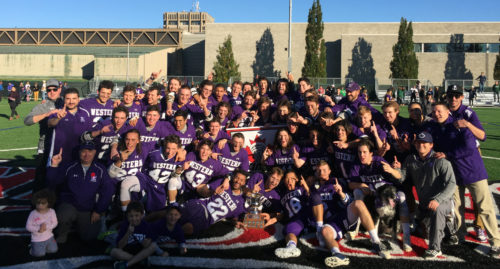 A year after losing the Canadian University Field Lacrosse Association’s Baggataway Cup to the McGill Redmen, the Western Mustangs men’s lacrosse team found redemption. Their near perfect 2016 season was capped with an 11-7 win over the Trent Excalibur on November 6 as they claimed their fourth CUFLA championship and first since 2001.

Senior Ryan Myles led the Mustangs with five goals and an assist in the championship game, winning both game and tournament MVP titles. He, along with Manraj Nijjar, Keagan Croley, and Cody Ward, were named to the All-Tournament team. Ward had three goals in the final game and Nijjar faced 20 shots in the win. Reid Reinholdt, Jackson Hulbert, and Sam Need also scored in the game.

Head coach Jeremy Tallevi watched Trent come back from a large deficit in their semi-final against the host Brock Badgers and knew the Excalibur would be a challenge. He relied on his veterans to be steady leaders for the Mustangs and to control the game.

“Our defense really stepped up and minimized their looks,” Tallevi said. “When they did get scoring chances, Nijjar made some huge saves. And Michael Byrne and the draw team did a great job of breaking their momentum by winning key faceoffs. The team was focused, committed, and driven to win all season. We felt we had some unfinished business (from 2015). I was especially happy for the fifth year players—Ryan McCrory, Sam Neeb and Jordi Jones-Smith. This was their third championship game and they led the team calmly and confidently.”

“Most of the team from this year’s victory was present for the loss against McGill last year and that provided us with a hunger to make it back to the finals and win it,” he said. “Trent is a very skilled team so you have to be wary about what they can do to you if you have mental lapses. Overall though we were confident in each other’s abilities to hold it down.”

The Mustangs lost their first game of the season to Brock 16-13. After that loss, the team went on a 14 game winning streak.

“We’re a tight-knit group of guys,” Jones-Smith said. “Our coaches told us to have a short memory and work towards the next game. We came together as a team and worked hard on every aspect of our game. What started the streak was that the team bought into what the coaches wanted from us.”

During those 14 games, the Mustangs dominated on both sides of the ball, beating opponents soundly, many times with 10 goals or more. Highlights included 21-2 and 23-2 games against Laurentian and Laurier, respectively, on the Mustangs home turf.

The coaching staff didn’t worry at after the loss to Brock.

“Our expectations this season were to win a championship,” Tallevi said. “Plain and simple, we wanted the cup. We got a sniff of it in 2015 when we lost to McGill in the final. The team was committed and driven to win in 2016. We made a lot of mistakes in the first game of the season including taking far too many penalties, but there was no major change that we made after the opening loss to Brock. We stuck with our systems.”

Jones-Smith is leaving a program that has grown exponentially since the team’s last cup win.

“We really were like a family this year and that is what attributed to a lot of our success,” he said. “It’s sad to have to leave such a great team, but I’m confident in the younger players and the coaching staff to be top contenders once again next year.”

Tallevi is looking forward to 2017 already.

“We have some terrific players returning,” he said, “from our starting goalie Manny Nijjar to league leading scorer Cody Ward. At every position we had players pushing our graduating players and making them better day in and day out. I feel great about those players stepping into starting roles next season.”

At the same time, he is sad to lose part of his core roster.

“We have some outstanding graduating players that we don’t expect back next season—Braeden Dale, Craig Charteris, Ziyan Zeng, Ryan McCrory, Jordi Jones-Smith, Sam Neeb, Pat McCrory and Ryan Myles. That group was the heart and soul of this team all season. As talented as those players are, they are even better leaders.”