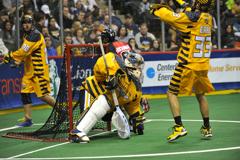 The Minnesota Swarm now have a small goalie situation because the team trade Tyler Carlson, who was more or less the default starting goalie for the last two seasons, for Brodie MacDonald now formerly of the Edmonton Rush. This creates a bit of a dilemma for the coaches. Macdonald has shown in a few games to have the goods to produce as a number one in the NLL, but it has been difficult to get a good sense because he has only played in 75 minutes of playing time in the NLL. The other problem is Zach Higgins who last year backed up Carlson, although he did get a few starts as well. Higgins has almost 500 minutes of playing time. Unfortunately for Higgins he only had a record of 2- 7 with a goals against average of 12.66.

Now the question is do you go with the one you know or do you go with the new guy. Higgins has more minutes and has more NLL experience, although it is only a one year difference, and has played with many of the defenders on the Swarm’s roster. MacDonald does come as the new guy but with the way the Swarm have gone about their off season this may not bode well for Higgins’ chances at becoming the starter.

Realistically the Swarm will give both guys the same opportunity come training came and the preseason scrimmages. With both players being young and neither having been a starter in the NLL before the job should still be up in the air. But to answer the overriding question will Higgins get his shot with the Swarm, the answer is yes he should be getting his shot as long as he shows up during the training camps and the scrimmages.

With the players having been traded for, including yesterdays newly acquired Ethan O’Connor, and those players signed or resigned the Swarm seem to have gone away with their usual tactic of stockpiling draft picks, which has become known as the Arsenal by myself. Although signing many players and getting a number of veterans in trades there is still the draft to worry about, where the Swarm have three picks in the top 10. Having that many picks in the top end of not so deep draft will help them come out with some very good draft picks.