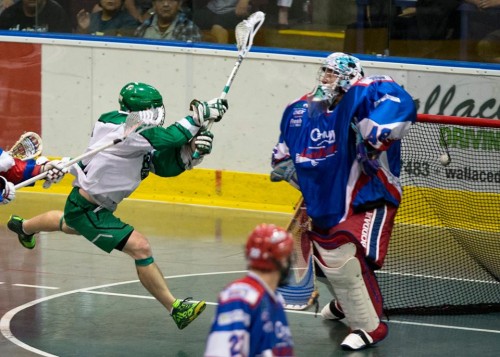 The WLA Draft took place in Vancouver on Wednesday, Feb. 10 with all seven teams making selections. There were some interesting strategies employed by some teams – Coquitlam was the only club making a selection in rounds 11 through 17, for instance. A lot of good talent was selected in this draft and could help propel some teams in their hunt to dethrone the Victoria Shamrocks.

Here is a quick look at each team’s selection and a draft grade, which is seemingly meaningless at this point, but why not? Teams are ranked by alphabetical.

The Lakers moved some of the draft picks from this draft and future drafts in exchange for some immediate relief in the goaltending (Zak Boychuk) and goal scoring departments (Eli McLaughlin). Although it left Burnaby with a limited number of selections, the whole picture looks great right now for a club who has been nurturing a promising young nucleus for going on three years now.

Byrne was the crown jewel of this draft offensively, and was rightfully drafted first overall. Burnaby drastically upgrades the left hand side of their offense with Byrne and McLaughlin and it should open up more looks for guys like Robert Church as well. Byrne got great experience with New Westminster in this summer’s playoffs and has been a prolific scorer since Intermediate for the Salmonbellies.

Beyond Byrne, Burnaby stayed mostly in house, selecting players graduating from their junior club. Stevens is an interesting pick because of his underrated production at the junior level with the Coquitlam Adanacs and Delta Islanders, scoring almost two points per game. Appels and Vogrig may make the club as offensive depth options, while it might be tougher for a guy like Cam Hudspeth to make the team with the amount of options Burnaby currently has at the back gate.

With an astounding 15 picks, the Adanacs employed a strategy that is rarely seen at drafts like this. It gives the club flexibility as they wait for guys with school and work commitments to get into full swing during training club and it’s an excellent opportunity or some of these players to show they can make a potentially immediate impact for the blue and gold. Another reasoning is Coquitlam’s recent acquisition of the senior B Tri-City Bandits, rebranding them under the Adanacs name. It would give the late picks a place to play immediately and develop, which is good for all parties involved.

It was important for Coquitlam to get one of the two homegrown junior products rated at the top of most teams boards. With the Salmonbellies deciding to go with Michael Messenger at No. 2, it opened up the opportunity for Rogers to continue playing his boxla in Coquitlam. Rogers is a massive body but is athletic and provides flexibility on both ends of the floor. A stronger defensive player than offensive, Rogers likely gives Coquitlam a lift in the transition game from day one.

Owen Barker, Luke Morris and Jake Carey give Coquitlam additional options out of the back gate. Morris currently plays basketball for Thompson Rivers University (CIS) and would already be in midseason form if he decides to play, while Barker plays a responsible game and can pitch in on faceoffs if needed.

Patrick Thornhill is one of the last pure enforcers but has decent enough stick skills he could command a regular shift like Daniel Amesbury in Maple Ridge. Am I already hyping up the potential fight of the 2016 WLA season?

For all the hype around the top four prospects in the draft, perhaps none of them have the ceiling that Cole Shafer has, and the Thunder were fortunate to get him fifth on the board. Shafer led the BCJALL in both regular season goals (45) and points (98) and can uncork unpredictable shots for all over the floor.

Bryce Brochu, Nathan Stewart and Evan Wortley also had good offensive production with their respective teams. Brochu was with the Thunder until he was dealt to the Okotoks Raiders for their Minto Cup run, but had had 42 points in 11 games with Langley and provides more size than the previous three mentioned. Stewart is a natural playmaker who displays good lacrosse IQ on the floor, while Wortley can play an all around offensive game with smarts and discipline.

Clelland, Lowenberger and Abrams can fit in with this defense, Clelland being the obvious candidate to step in right away given his NLL experience. Wong and Mayervich are long shots to make the team, but Mayervich could figure into the conversation as a potential back-up goalie with a strong camp.

Despite taking three goalies in six selections, there is a method behind Maple Ridge’s madness. Frankie Scigliano is reliable and has developed into a top-flight goaltender, but Carson Michaud and Brandon Mulligan won’t return to the club. Taking into account the increased workload Scigs faces in Calgary, having plenty of options in the cage can’t hurt. Claxton was the best goalie in the draft, but Flintoff and Del Bianco have some potential. At the very least, the Burrards can move one of them if need be but I think the idea is generally strong.

The Burrards traded the fourth overall pick for hometowner Luke Gillespie, an even trade depending on whether you think James Rahe’s ceiling is higher than Gillespie.

Symes, Saari and Knuttila are all good depth pickups. Saari is a willing fighter and was an underrated defender in junior. All three have a chance of making the opening night roster.

With the most picks in the draft with 16, Nanaimo has restocked the cupboards and took some intriguing players who could contribute quickly.

While their first three picks were mainland players, they don’t have enough value to force a trade back here, and you would think the T-Men did their due diligence in ensuring these players were up for the travel. If they are, all three players could carve out a role immediately. Gilles has exceeded expectations so far in Colorado which helped propel his value into a sure first round pick.

Stuart and McIntyre are a pair of solid picks. Stuart has three years of proven experience with the Junior Adanacs and is a reliable two-way player. There’s a bit of a different dynamic to McIntyre – he’s got great size and athleticism, but he also has a high ceiling. He had 20 goals in the regular season and could be the missing piece on the right side with last year’s leading scorer Mac Johnston and Mitch Parker.

Nanaimo might not be very good again, but the offense appears to be in much better shape than it was last year.

New Westminster are definitively the team to beat Victoria following a draft where they were able to acquire two of the four (or three, depending on how you viewed Rogers vs. Rahe) best players in the draft.

Both Messenger and Rahe can be cornerstones of their individual units and that is huge for a New West team that needs an injection of high-level talent in order to compete better with Victoria. I think Rahe will do quite well in New West, where he will be able to take some pressure off of Logan Schuss. He joins a deep offensive unit that also includes Keegan Bal, Colton Clark and Jordan McBride.

I can see why head coach Steve Goodwin wanted Messenger: he exemplifies toughness, is ultra-athletic and can play in the transition game. Players like that don’t become available often. For New West to get two of them is really great work.

Victoria doesn’t have too many needs, and so the WLA Draft was a bit of an exercise in futility for them. They didn’t have a first round pick but still get a promising player in Taylor Northway.