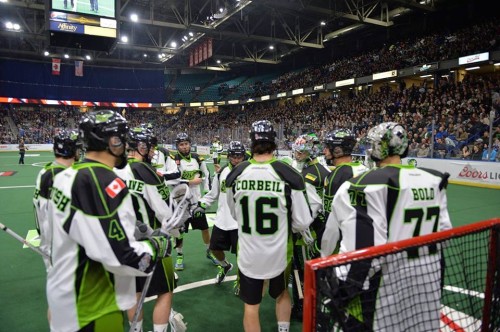 The Saskatchewan Rush and the Rochester Knighthawks will battle in front of the largest home crowd at SaskTel Centre since relocating from Edmonton on Friday night. Over 12,000 fans are expected to fill the building to watch the 2014 (Knighthawks) and 2015 Champions (Rush) fight it out for bragging rights.

Both teams sit at a 3-2 record with the Rush losing to Colorado 9-7 while Rochester needed overtime to get past Vancouver.  The Rush and K-Hawks have both enjoyed success in the past, but find themselves playing very inconsistent this season.

The Rush had many opportunities and played well against the Mammoth but could not overcome Colorado’s five-goal run in the third quarter. Give Mammoth goaltender Dillon Ward credit, who posted 47 saves and left the Rush forwards looking skywards after many brilliant saves.

Still, the Rush must improve if they hope to beat Rochester. Their power play must capitalize and their 5 on 5 play must produce. They only managed one even strength goal in the second half, along with giving up three transition goals against Colorado. That production will not earn them a victory against a strong defensive and veteran team like Rochester.

Last year the Rush laid a 16-3 beating of the Knighthawks in a game that saw Matthews, McIntosh and Church combine for a total of eight goals and twelve assists. It is most certain that Rochester will have that score on the back of their minds and will be looking for revenge.

Game time is 8:30 EST at the SaskTel Centre, which will feature special guests Sea Gals cheer team from the Seattle Seahawks.