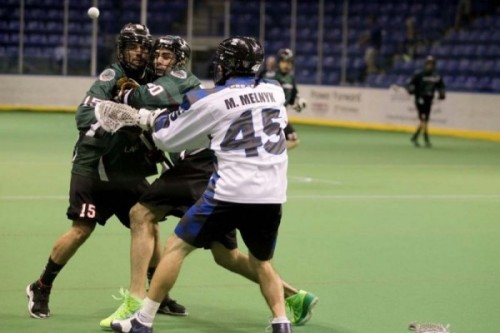 1. Eli McLaughlin  – Nanaimo Timbermen
McLaughlin came into his rookie season in the WLA after a stellar rookie season in the NLL that saw him pick up 38 points in 17 games with the Colorado Mammoth. McLaughlin hasn’t slowed down much four games into his WLA career, averaging two points per game thus far. This week got off to a slow start for McLaughlin however, tallying just an assist in Tuesday night’s match up with the Burnaby Lakers. However McLaughlin exploded on Sunday night with six points against the Adanacs, picking up a goal and five assists to give him seven points in two games this week.
2. Dan Taylor – Maple Ridge Burrards
The Leigh University grad has burst onto the scene in his first WLA season, picking up an outstanding 19 points in just four games. Taylor made a name for himself during the 2014 Western Canadian Finals, picking up 16 points in four games against the BCJALL champion Coquitlam Adanacs. His early season offensive output with Maple Ridge has really solidified the left side of their offense, and has made the early season absence of Riley Loewen much easier to withstand. This past week Taylor put up a goal and six assists for seven points.
3. Luke Gillespie – New Westminster Salmonbellies
The fourth overall pick in the past WLA draft has made the transition from the BCJALL to the WLA with relative ease, picking up 12 points in his first four games, placing him fourth in Salmonbellies scoring early on. This past week Gillespie had a four point game against the Burnaby Lakers, tallying 2 goals & 2 assists, while he finished off the week with a 2 point performance in a win over the Maple Ridge Burrards on Sunday night.
4. Brandon Anger – Coquitlam Adanacs
Following a 111 point season with the Windsor Clippers last season, Anger decided to head West this season, to prove his scoring prowess could translate to the pro level. He hasn’t disappointed as early on he sits third on an Adanacs team that struggles to produce offense, with 9 points in 5 games. The youngster has been one of the few bright spots in Coquitlam this season, as this past week Anger 3 goals & 2 assists for 5 points in the Adanacs back to back wins over Burnaby and Nanaimo. Continued production from Anger will be vital if the Adanacs want to continue their recent string of success.
5. Eric Penny – New Westminster Salmonbellies
Penny comes into the 2015 WLA season fresh off his rookie season in the NLL with the Vancouver Stealth. Penny took it on the chin a few times during the NLL season, but he also displayed his ability to steal games, and that’s the Penny we’ve been seeing early in the WLA season from him. Penny was instrumental in the Bellies staying undefeated this season, making 41 saves on 48 shots in the Bellies narrow 9-8 victory over Burnaby on Thursday night. Penny leads the league with a 4.56 goals against average and a 0.891 save percentage.
Honorable Mention
Anthony Malcolm – Langley Thunder
Shane MacDonald – New Westminster Salmonbellies
Josh Sullivan – Coquitlam Adanacs
Connor Goodwin – Maple Ridge Burrards
Patrick Miles – New Westminster Salmonbellies