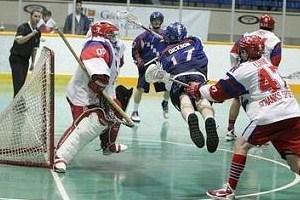 If the first few weeks are any indication of what where going to see in the WLA this season, we are in store for one heck of a season. With so much parity throughout the league this year, its really hard to predicit where teams may fall once the regular season has concluded. Victoria has added a number of big name players, as their back to back losses to the Six Nations Chiefs in the Mann Cup finals has left a bitter taste in their mouth. Maple Ridge has made big strides forward, challenging the Shamrocks for the WLA crown a year ago. New Westminster has put together a solid young roster, that it back stopped by two of the top young goaltenders in the game today. Langley has also beefed up their lineup some with some Ontario born talent, as Pat Saunders will look to replicate some of the success he had the last time he dawned a Thunder Jersey. Nanaimo and Burnaby will be competitive, and will undoubtedly challenge for a playoff spot in 2015, while the once proud Coquitlam Adanacs look to have fallen on some hard times of sorts.