True Temper Sports has been one of those companies that you never heard of, but probably used their products.  According to their website, they have been designing and manufacturing shafts as a supplier for other lacrosse brands since 2004.  With lacrosse growing the way that it is, they have decided to enter the market with their own brand of lacrosse shafts, True. 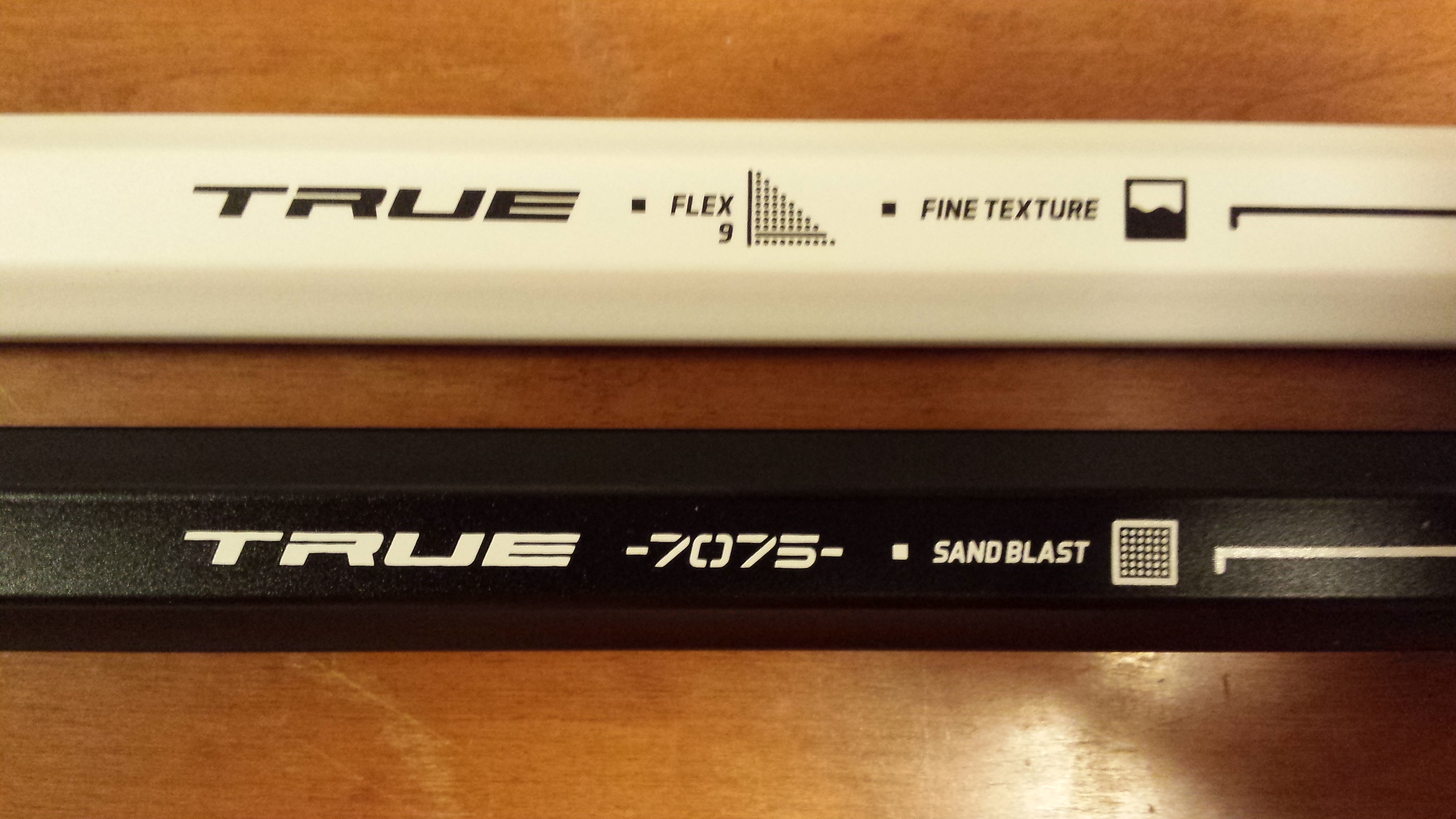 What this means is that there is a new brand of shafts out there, but they are by no means new to the game.  They were nice enough to send us a pair of their new shafts to try out, and I am here to tell you what I found.  What they sent were one of their alloy shafts and a composite.  Overall, I really like the styling of both of these.  It’s a simple “True” in large font in the middle of each shaft.  A nice touch is also at the bottom just above the butt end where the shaft model is printed.  It isn’t anything amazing, but it adds some nice style to them.  Also, near the top is listed the model, grip type and flex value.  Now let’s take a closer look at the alloy model. 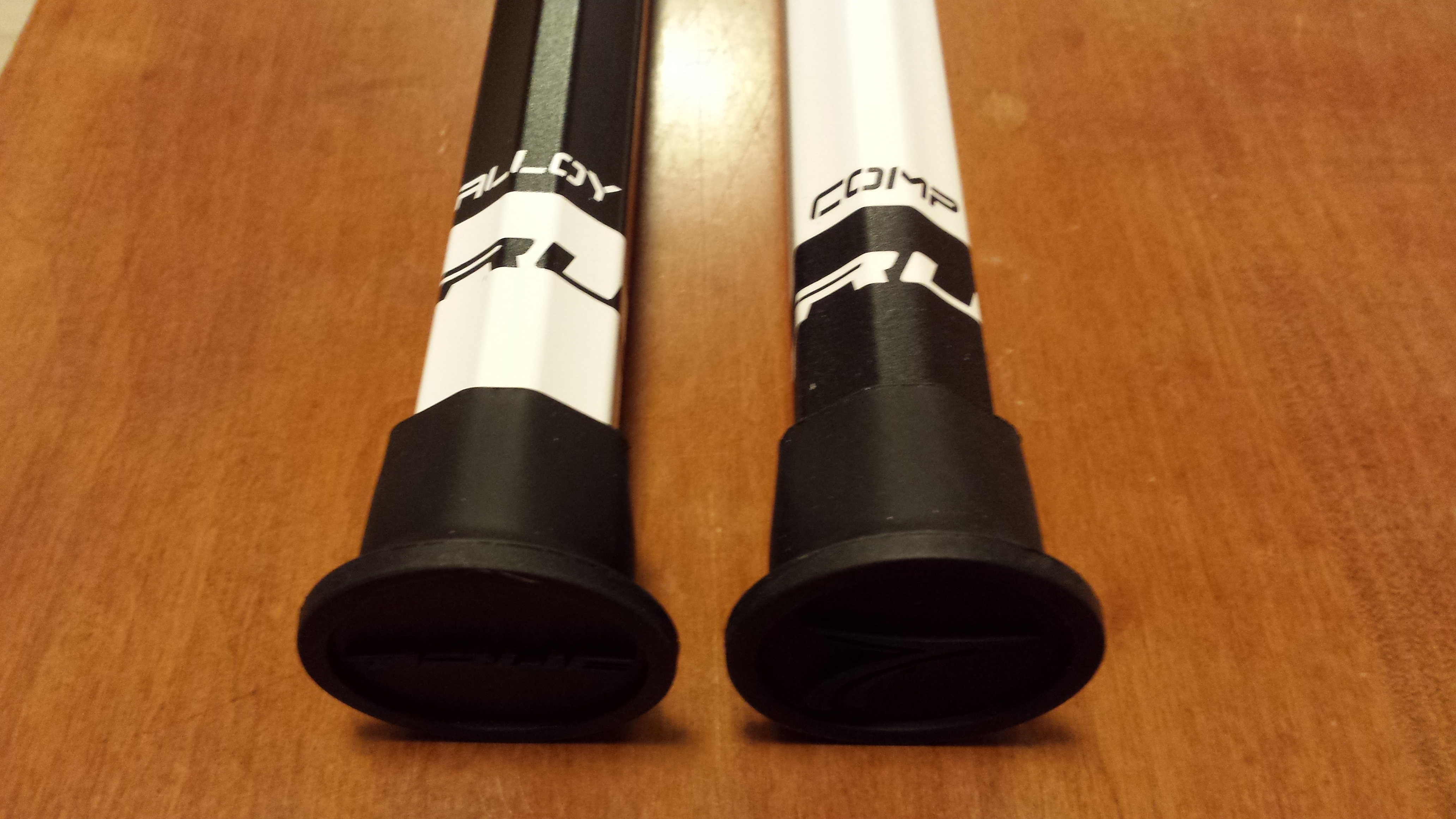 The TRUE Alloy 2.0 shaft is what can best be described as an entry-level aluminum shaft.  It is made out of the 7075 alloy, which is found in a handful of other shafts in the marketplace such as the STX Surgeon and Brine Swizzbeat.  It has what they call a sandblast finish, which means that it isn’t smooth, but it isn’t what I would call a rough finish either.  If you are looking for a lot of grip, I don’t think that it will replace tape or a rubberized type of finish.

As far as shape goes it is not a deep concave grip and the corners are a little sharper, rather than completely rounded off.  That gives you a good feel for the stick, which is better for beginner players.  If you aren’t looking to spend a ton of money on a shaft, this is definitely a good option for you.  It is lightweight, relatively strong for most levels of play and priced at a point that won’t break the bank if you need to replace it (it retails around $60).  It comes in the black model (shown) and silver.

From a use perspective, it comes with several holes predrilled to fit a few different brands of heads, which is great to see.  Since they are only a shaft manufacturer, this makes a ton of sense.  I threw a head on there, there was no rattle or anything, and it had a nice feel to it.  I wouldn’t hesitate at all to recommend this to someone. 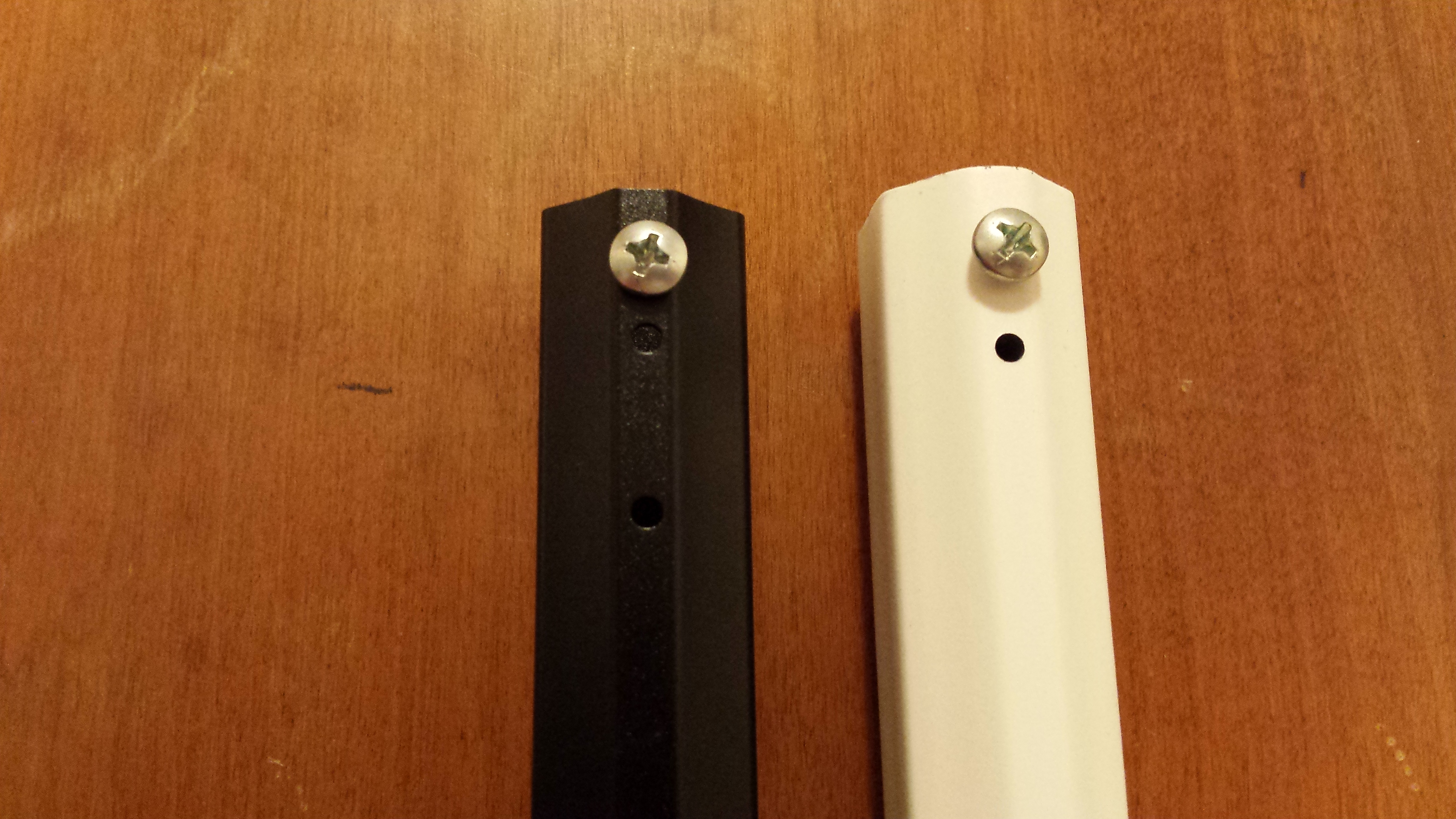 The second shaft they sent along was the COMP SF 2.0, which is a composite, rather than metal alloy.  Not only does this  make it a very lightweight shaft, but it give it some outstanding flex.  I’ll be honest, my upper body strength is incredibly lacking to a point I’m a little ashamed to admit.  With that said, I could take this shaft and visibly bend it with just my hands on each end.  Noticing that right out of the box, I was a little nervous to see how it would react with passing and shooting.  Regarding the grip, it is definitely a rougher grip than the alloy and the corners are a bit more rounded.  I haven’t felt the need to add tape for grip on this at all and haven’t had any issues playing in the rain. 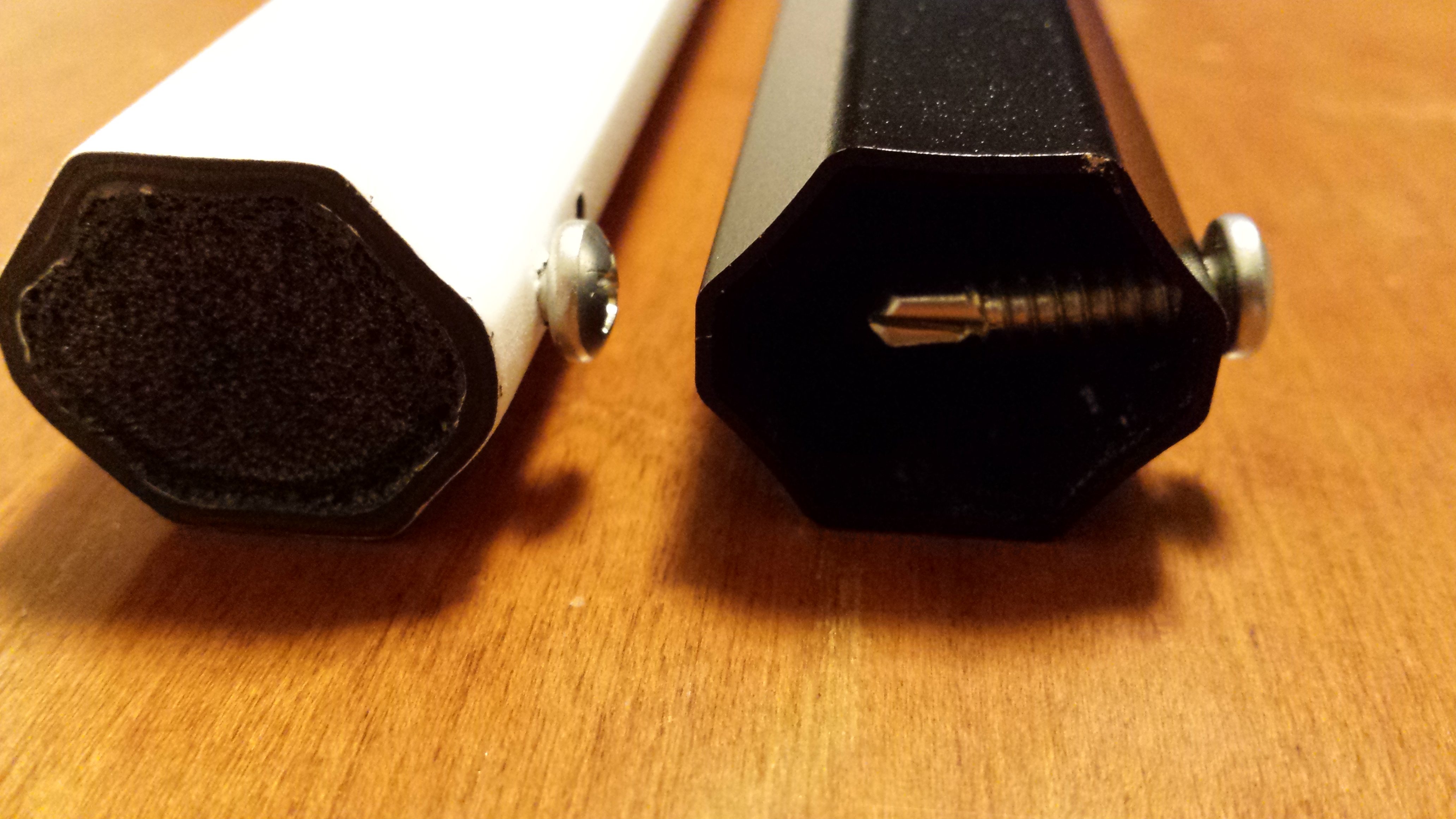 Once I put a head on there, I was really anxious to see how it performed with passing and shooting given the flex it allows.  With passing, there was absolutely no difference between this and the alloy shaft.  Even when throwing quicker passes, I still had no problem.  Shooting was a different story.  The first time I really was able to wind up, it came off the stick way earlier than I was expecting.  After a few more tries, I noticed that you really can feel the bend of the stick when taking a hard shot. 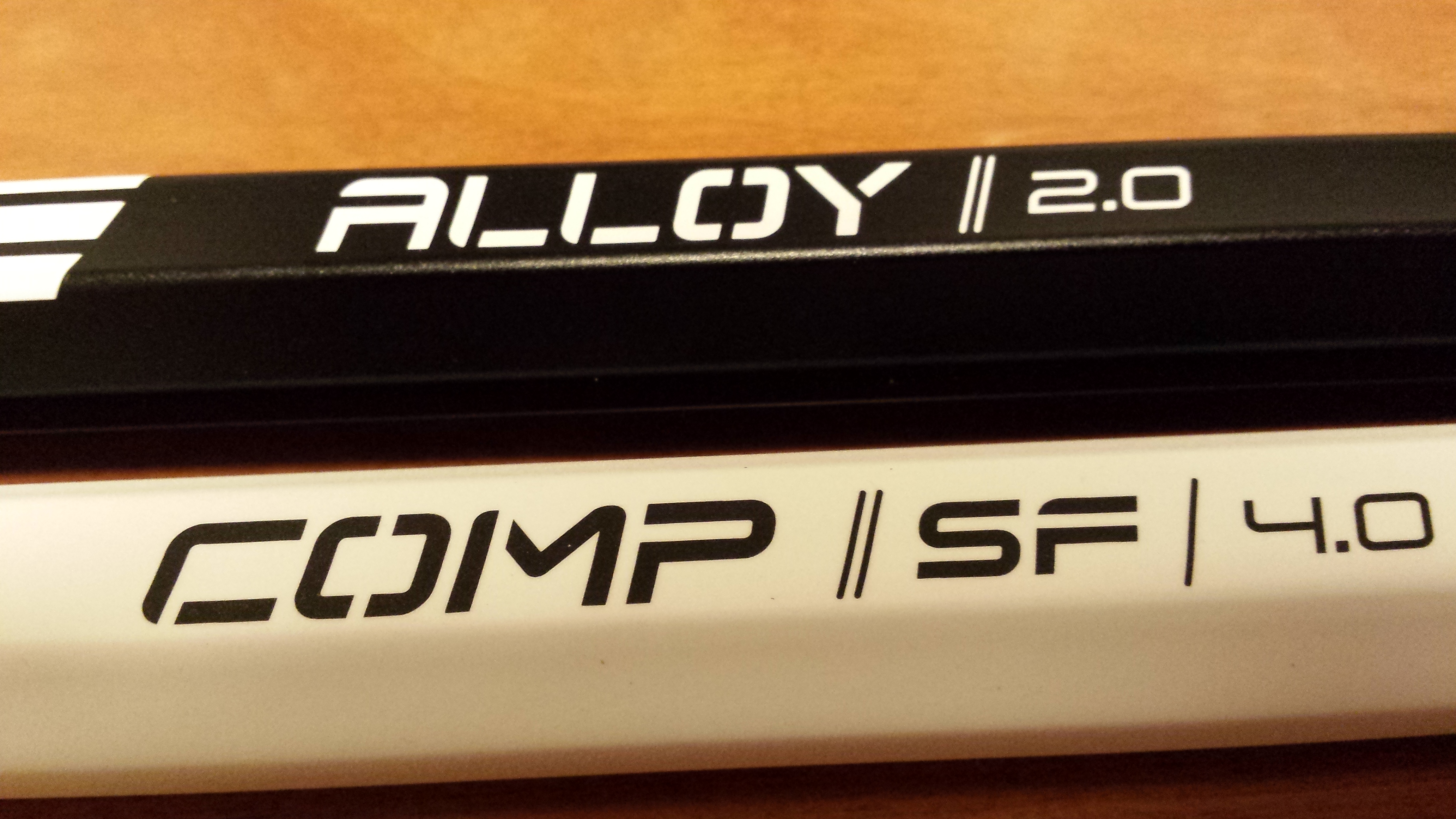 The more I have used this stick, the more I love it.  Shooting feels much more natural and I have a better feel for the ball when using this stick, which I was not expecting at all.  I didn’t have a radar gun to see if it increases shot velocity, but I do anecdotally feel that it helped my accuracy at least a little bit.  My only remaining concern is with regards to durability.  I have played in a few games and several practices with it and there isn’t so much as a scratch or dent in it at all.  My true (no pun intended) test for a shaft is always going to be box lacrosse, but that doesn’t start for me for a while yet, so I will post an update if there is anything major to report there.  Overall, I do feel pretty confident with it at the moment.

The COMP shaft is priced really well to in comparison to competition.  At around $110 retail, it is at the low end of the elite shaft lineup available and priced under other composite shafts.  I don’t think you need to have a 90 MPH shot to take advantage of this technology, but you won’t be able to fully utilize it if you are not someone who takes hard, outside shots.  My personal recommendation is that this shaft is definitely worth  a look and it quickly has become my new gamer.  The COMP shaft is shown in white, but is also available in black, blue, and red.

Both of these are good, quality shafts that come in at a competitive price point at full retail based on the pricing I’ve seen so far.  If you are in the market for a new setup, I would add True to your list to check out. 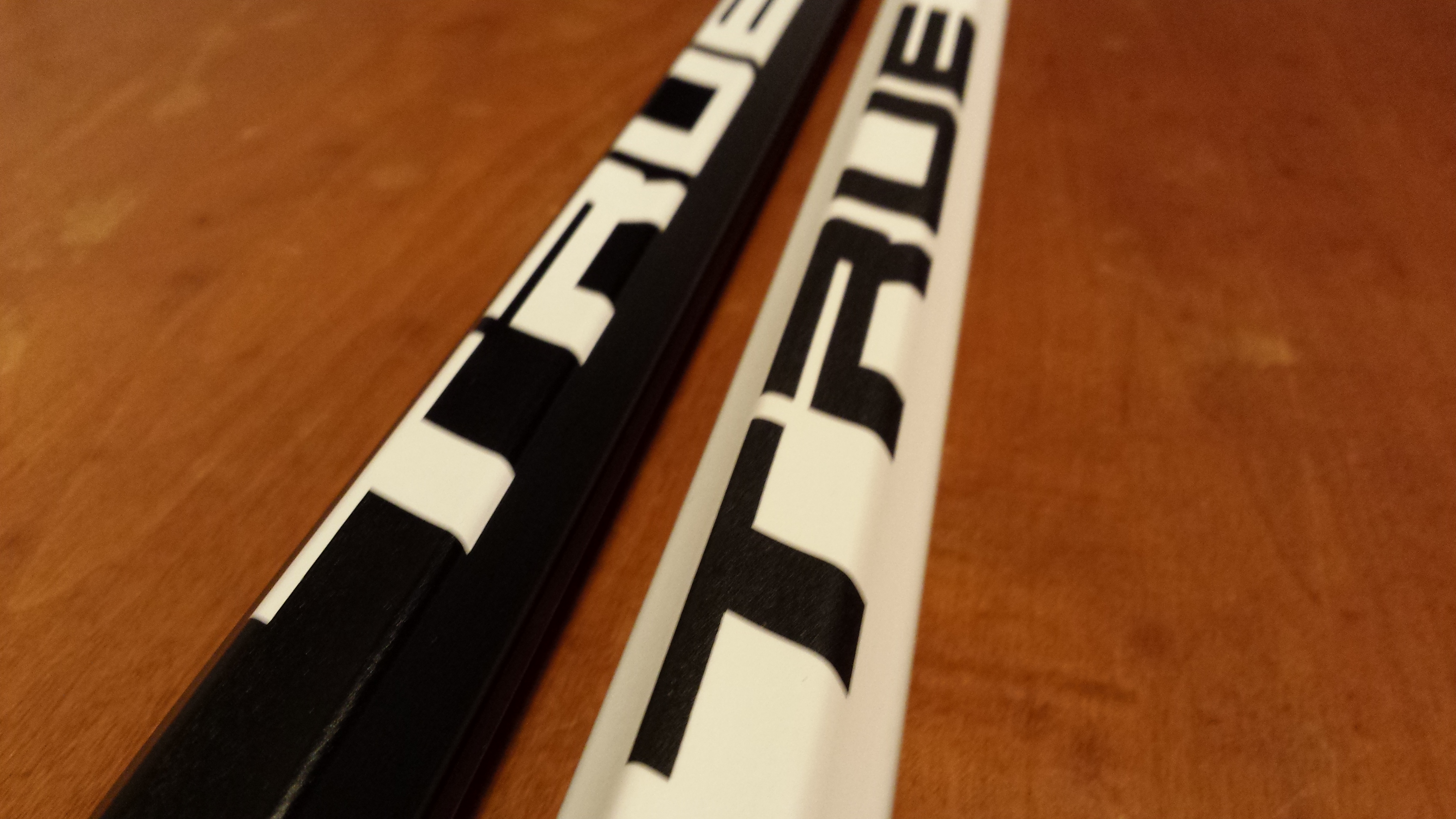