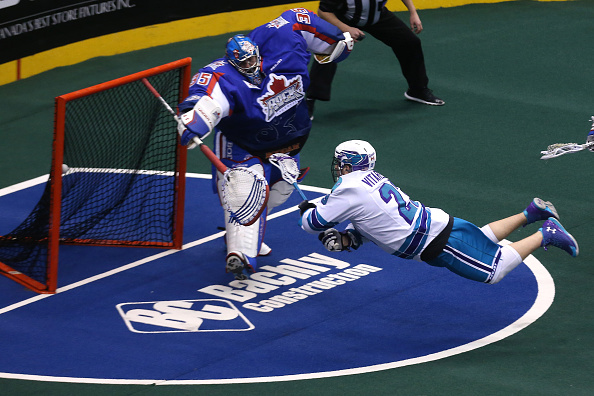 There were only two games this week, so there is really only one thought I want to harp on; the Toronto Rock. The team is in an opposite position than it usually is in, with an 0-4 start, and the geography of the situation is giving me a new theory.

Often times, lacrosse hotbeds such as Toronto (or, in Major League Lacrosse, Chesapeake) can be an advantage. Players want to go there, and lacrosse is a player-driven sport. Anthony Cosmo holding out in Minnesota three years ago cost Buffalo three first round picks so that he could play. Dozens of players have left small markets to end up in their hometown. Garrett Billings ending up in Vancouver is an example of this.

Almost every NLL offseason is dictated by what the Rock do. Jeff Gilbert, two offseasons ago? Was between Buffalo and Toronto, leaving Minnesota to lose its top defender. Brock Sorensen, traded to Toronto from Minnesota. Brandon Miller, the goaltender holding out in Philadelphia, goes to Toronto.

It is no coincidence if you notice a trend on the Rock roster; older, veteran players with klout from Ontario. Every player on the team, excluding Pat Merrill and rookie Luc Magnon, are listed as Ontario natives. Ontario is the leading demographic of NLL players, but not a single roster has the same lack of disparity.

Many of these veterans, on their own, could be nice additions to any team. Look at a team lacking offensive chemistry in Calgary, or a Georgia team needing leadership. Wouldn’t a Biernes or Ross be a nice addition?

But, it would never happen.

Because the National Lacrosse League is a player driven league, and none of these players want to leave Toronto.

Almost all of the players on the Toronto roster are there by their own choice. This is a fact that can be attempted to be debated, but almost any insider in the NLL will speak to this. Since the Toronto Rock bought the Oakville Rock of Major Series Lacrosse, it has become even more so. The team out of Oakville hosts seven Toronto players. The team plays out of the Toronto Rock Athletic Centre, located in Oakville and the project of Toronto owner Jamie Dawick.

Anyways, these players are embedded into Toronto for a reason. They are also excellent pieces for a team that would want to rebuild. Look at the  Georgia Swarm. While they are maybe an over-the-top example of rebuilding in lacrosse, the pieces that have been moved for draft picks speak for themselves; Ryan Benesch, Anthony Cosmo, Logan Schuss, Sean Pollock, Kevin Buchanan, Brock Sorensen, Andrew Suitor. Mostly franchise players.

Georgia, 1-2, looks like a much more dynamic team than they have been in past years, and much of that has to do with young talent on the roster (and also Johnny Powless breaking out, who was acquired in the Schuss trade). Both Thompsons, along with Randy Staats, are having big years up to this point. The Rock didn’t have a first round pick in this year’s draft; they ended up with Dan Lintner through a trade with New England.

The point is, the Rock do not have the opportunity to integrate talent, because the current veterans are untradeable. The players on the Rock are there because they want to be on the Rock, and not on other teams.

The opportunity for the Rock to rebuild from an 0-4 team does not exist, and that means this rock-fall might fall far.

* Apologies for the lame pun, but, you know, it’s an entertainment business.