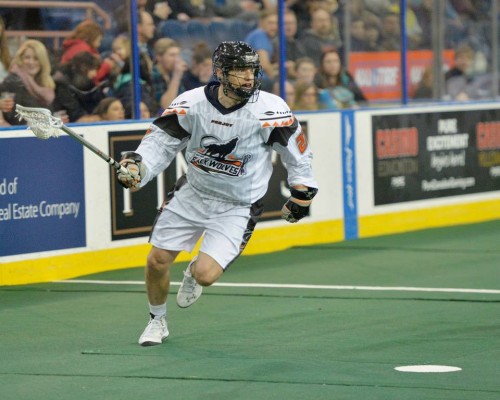 There have been two trends this NLL offseason, and the biggest one might be field lacrosse players signing with indoor teams. Josh Hawkins was the latest as the Boston Cannons midfielder signed a contract with the New England Black Wolves.

Hawkins had been widely reported to have signed with the Black Wolves months ago, but it took until this week to make it official. Wolves general manager Rich Lisk had told ILWT a few weeks ago that he was working hard to try to bring Hawkins in.

While there certainly is a story to field players signing in the NLL, the Black Wolves offseason is also of note. New England, after making it to the conference finals last season in the east, has stacked its roster with veteran free agents and high round draft picks to look to be a real contender in the NLL again.

After already signing Jay Thorimbert and Chad Culp earlier in the summer, the Black Wolves announced the addition of Rochester Knighthawks defender Scott Self as well.

What New England now has is a glut of defenders, with veterans including Self, Derek Suddons, Dan Ball, John Ranagan, Brett Manney, Mitch McMichael, Mike McNamara, and Bill O’Brien, along with young talent such as Sheldon Burns, Zac Reid, and Derek Searle, who was traded for.

That’s in addition to a transition game that includes Thorimbert and the Wolves’ faceoff specialist from last season, Ryan Hotaling, who may have himself in competition for a roster spot now. Hawkins joins on transition with with Martin Bowes and potential rookie Myles Jones in what could be a dangerous back door for New England.

The offense itself was the Black Wolves’ weapon last year, and it’s even better with Shawn Evans, Kevin Crowley, Pat Saunders, Kevin Buchanan, Brett Bucktooth, and Kyle Buchanan, along with the addition of Culp and rookies Seth Oakes and Dan Michel.

With 229 goals last season, the Black Wolves already saw their offensive potential. Culp adds another 32 points. The moves such as Hawkins or Bowes are moves the franchise would have made all the way back to its Philadelphia days, but additions like Culp and now Self are showing a willingness to sign the league’s top and most expensive talent and fly them to Connecticut each week.

Maybe it should have been noticed last season when up against the cap, New England still matched Buffalo’s offer sheet to Saunders for three years, or when they traded for the MVP in Evans, but suddenly the Black Wolves might be the most formidable team in the league.

When it comes time for cuts, New England is going to have some difficult decisions to make. This roster is one of the best in the league on paper, and with the struggles of Toronto last season and Rochester losing the bulk of its veteran roster, this might be a season where the Wolves make some noise just three years into operation.