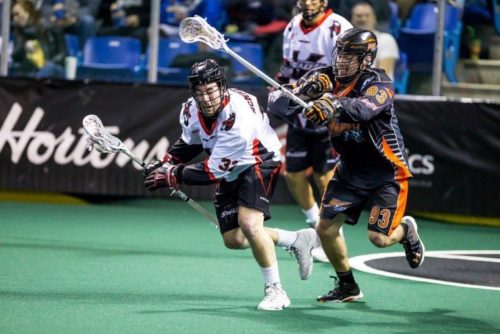 The one team to make the most moves this NLL off season has been the New England Black Wolves. After making the eastern conference finals last season, the Black Wolves are gearing up to make a run for the east. While the team has added the likes of Scott Self and Chad Culp, Mitch McMichael is looking to make an impact as well.

“I was excited,” said McMichael of being traded. “Me and my wife had plans to move east. I’m excited to be with such a new organization. I wasn’t playing a ton in Vancouver, and I can crack this roster hopefully.”

McMichael, a transition player, began his career with the Washington Stealth where he scored 14 points in his rookie season for a career high. He has played his entire career with the Stealth organization before being traded.

The competition for the roster at each position is tough, but defensive transition might be the deepest spot. McMichael, a lefty, added two assists for the Stealth last season where he played in ten games.

“It’s going to be hard,” said McMichael. “With any camp of any team, it’s hard. It will be intense especially with me being brought in with a lot of other veterans and new guys. It will be super competitive with not many spots.”

McMichael wasn’t surprised by the trade, since he wanted to move to the east coast, but joining a team like the Black Wolves who are building towards being a contender now adds excitement.

“I think I expected to be traded,” McMichael said. “Traded or released, at least. I would have preferred not to travel a lot, so the trade wasn’t lacrosse related.

“Being with a new team, it’s great,” he said. “The expectations are tenfold, and there are a ton of changes. I think they’re spectacular moves. With Evans and Kirk having great seasons last year, it’s similar to Washington in their first year. The makeup is getting to where they are imagining what they ideally want. It’s up to guys like me to finish that product.”

New England as a franchise has always been open to finding talent from different avenues, as evidenced by being the most American roster in the league, and drafting players such as Myles Jones and signing Martin Bowes and Josh Hawkins. Throughout the league, however, more field players are making the leap to the pro indoor game, making competition for veteran box players like McMichael even more difficult.

“I think we’ve seen a lot more American field players, which makes the talent pool deeper.” McMichael said. “Having only nine teams makes it difficult to make a roster. It’s the same challenge for any team, even if you were on the roster last year, it doesn’t guarantee it this year.”

One of several new players on the team this season, McMichael will be competing among the likes of  Mike McNamara, Derek Searle, Zac Reid, and Pete Rinnie for a spot.

“There’s so much talent, it’s going to be a grind.”