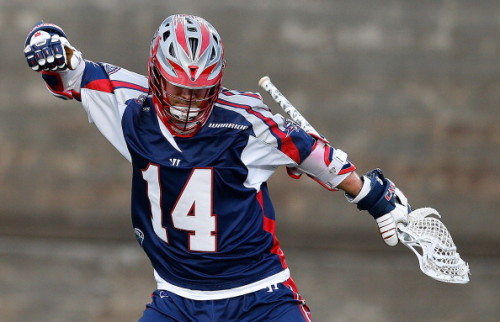 The Boston Cannons of Major League Lacrosse (MLL), the premier professional outdoor lacrosse league, have announced that former stalwart and captain Ryan Boyle will officially have his number 14 retired by the team. Boyle will be recognized at the May 17th game as the first Boston Cannon, and first MLL player to ever have their jersey retired.

In honor of Boyle’s achievements, the Cannons are offering a special seating section with $14 tickets for the May 17th game which coincides with Military night. Boyle will be recognized on the field in a post-game ceremony to officially retire #14 from the Cannons. All fans are encouraged to stay and watch, as a lucky random ticket will be called to win an authentic autographed jersey from Boyle.

“The Boston Cannons are proud and honored to recognize the great career of Ryan Boyle by announcing no Cannon will ever wear number 14 again,” Cannons Vice President and GM Kevin Barney stated.

“Ryan’s 11 year MLL career will go down as one of the greatest of all time. His accomplishments on the field speak for themselves, but this is also about what Ryan has meant to the sport of lacrosse off the field as well. In honor of this special event, we are offering select tickets to the game at a special price of $14 each.”

After an impressive 11 seasons, and 4 MLL titles, Ryan Boyle officially announced his retirement at the conclusion of the 2014 season.

“I am looking forward to giving our fans the opportunity to thank Ryan for all he has done for our team, our league and the sport of lacrosse,” said Barney. “Ryan was one of the most respected players, being voted captain year after year by his teammates, and he was also respected by opposing players and coaches alike”

Ryan was a four time All-American at Princeton before being drafted to the MLL as the second overall pick in 2004. In his 11 years as a professional lacrosse player, Ryan split his time between the Philadelphia Barrage for 5 seasons before making Boston home for the remaining 6. Ryan won 4 MLL titles over his tenure, 3 championships with Philadelphia (’04, ’06, ’07) and one with the Cannons on 2011.

Ryan is the only player in MLL history to have 25+ points in 11 consecutive seasons. In 2012, he garnered a career high 39 assists.

Aside from his impressive team titles, Boyle was a stand out by his own right, garnering up many individual accolades. In 2004, he was named the MLL Rookie of the year in his inaugural season after scoring 17 goals and adding 28 assists in just 8 regular season games. Additionally, he was a 5-time MLL All-Star, and 3-time U.S. Men’s National Team player (’02, ’06, ’10 World Games) winning 2 World Game Gold medals in 2002 and 2010.

Boyle had much success at the collegiate level as well, winning the NCAA National Championship with Princeton in 2001. Ryan was a 4-time All-American as a Tiger, and was a 2-time Ivy League Player of the Year.

At the end of his 11 seasons, Boyle has certainly accomplished his personal goals and much more. He leaves as one of the most decorated players to come into the league, but beyond that is able to exit with countless life-long relationships and friendships. Despite his extensive list of awards, honors and Championship wins, what he remembers the most is the time well spent with his teammates.

With a clear dedication to the sport, Boyle will undoubtedly continue to be a large influence on the game. As he continues to develop youth lacrosse with his Trilogy program.

“Ryan Boyle will be recognized as one of the greatest attackman the game has seen. He’s an unparalleled leader with uncommon toughness and determination,” Cannons Head Coach John Tucker states. “Our personal connection spans more than 20 years. It has afforded me a unique opportunity to watch him grow and develop. I can say that he forged his own path and worked extremely hard for everything he achieved in the game of lacrosse. A brilliant tactician – fearless leader – but most of all, a winner. It has been a true honor for me to be a small part of his extraordinary career.”