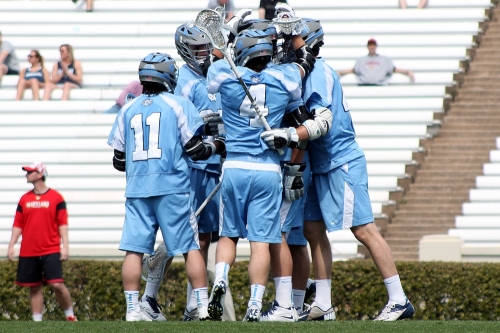 Baltimore, Maryland – On a beautiful day in Baltimore the Johns Hopkins Blue Jays opened their home slate against the North Carolina Tar Heels.  Both teams came off tough losses in their prior games and only one would leave avoiding a two-game losing streak early in the season.

Carolina scored immediately off the opening face-off victory and Tar Heels would score the next three to take a commanding 4-0 lead late into the first quarter.  Chris Cloutier scored to open the scoring. Then Patrick Kelly would sandwich two goals around Michael Tagliaferri’s tally to take a commanding early lead.

Senior Ryan Brown would continue his nation-leading goal scoring streak as he opened the Jays scoring, assisted by Shack Stanwick.  The first goal of the quarter for the home team.  Kyle Marr finished close to the goal to open the scoring in the second stanza.  This cut the Tar Heel lead to 4-2.

UNC would get two back, the first on extra-man advantage.  Shane Simpson found Cloutier for his second of the game.  Luke Goldstock would push the lead to four-goals for a second time in the game when he scored with 8:27 left in the half.

The Blue Jays answer with junior Cody Radziewicz beating Carolina goalie Brian Balkam.  On a broken play down low, midfielder Kieran Eissler found Ryan Brown who cut the lead to two, 6-4.  Junior John Crawley would then cut the lead to a single goal.

Simpson would stop the Blue Jays’ streak as he isolated and dodged past his defender.  With just under two minutes to play in the half, Carolina regained their two-goal advantage.  After a turnover in the closing thirty seconds, North Carolina would lead Hopkins 7-5.

The first half was marred by turnovers by both teams.  Hopkins midfielder Craig Madarasz won the majority of the faceoffs in the first half, but the Jays’ did not capitalize on the possession time as turnovers plagued the offense.  Hopkins goalie Brock Turnbaugh was saving .500 percent of the shots coming his way, which outnumbered his counterpart.

Hopkins would settle the pace in the opening minutes of the second half and come back to tie the game, the first since 0-0 in the first twenty seconds of the game.  After Carolina turned the ball over trying to clear, Brown found Stanwick to close the gap to a single goal.  A minute later, Brown scored to continue hot streak.

Steve Pontrello gave Carolina the lead again, after a long position.  The Tar Heels got possession after an incredible save by Balkam.  Pontrello beat his defender to the corner for an 8-7 lead for the visitors.  He would score his second 22 seconds later, off a similar dodge, and the Blue Jays would again be down two.

The back and forth continued.  Hopkins midfielder Brinton Valis found Radziewicz for his second of the contest.  Valis would score his first of the season on the following possession, assisted by Stanwick.  With under 11 seconds left in the quarter, Hopkins tied the game at 9.  The game was deadlocked going in the final stanza.

Carolina would score first as Tagliaferri tallied a long shot that beat Turnbaugh.  A North Carolina penalty led to Holden Cattoni’s goal during the extra-man possession.  On the goal, a late hit would give the Blue Jays the advantage again.  On the advantage, Stanwick would score to give Hopkins their first lead of the game at 11-10.

Chris Cloutier scored after a Hopkins turnover on the clearing attempt to again tie the game.  Carolina would retake the lead on the following possession.  Tagliaferri would finish his hat trick, giving the Tar Heels an 12-11 lead with 6:57 remaining in the fourth.

Shane Simpson isolated his defender and would give the Heels a two-goal advantage.  The possessions that Carolina was able to get after winning face-offs late put the pressure on Hopkins.  Pontrello scored with 2:04 left to give the visiting team a three-goal lead.

Carolina would finish the game with Cloutier’s fourth goal of the game.  The momentum changed when the face-off game went against the Blue Jays.  The combination of the Kelly’s and Carolina put pressure on Hopkins, digging out possessions in the fourth quarter.  The swing clearly tilted the contest in favor of the Tar Heels.

North Carolina has the defending champions next, facing the Denver Pioneers who they defeated during the regular season last year.  Princeton comes to Homewood Field to battle the Blue Jays, who fall to 1-2 on the season.