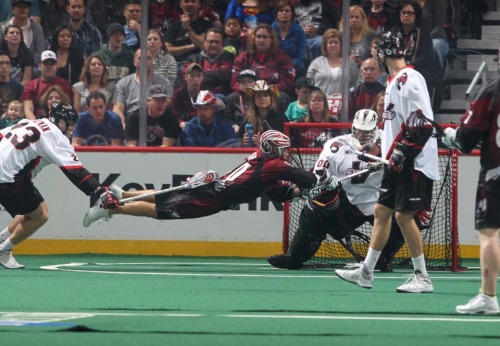 Adam Jones doesn’t care much for your five goal lead.

Jones was at his very best in the fourth quarter of the Colorado Mammoth’s come-from-behind 11-10 win over the Vancouver Stealth. He had the quickest natural hat-trick, the league says, since at least 2005. He erased Vancouver’s lead at 9:08 of the final quarter before winning the game with two seconds left in the game.

For Vancouver, the first half was very much like the Rochester game, taking a 6-2 lead into halftime off of a Logan Schuss hat-trick and contributions from newly-signed Thomas Hoggarth and Tyler Hass. Rhys Duch had a pair of goals in the third frame to push it to the ominous 9-4 lead.

Enter Adam Jones. First player in NLL history to score a sock trick in one quarter. 55 games in a row with a goal. For every game Vancouver seems to do well defending John Grant, Jones has been a factor and the Stealth never seem to have an answer for him.

It’s not like Tyler Richards didn’t play well, making 49 saves on 58 shots. The defense leaked a lot of shots against, but held it together for the most part. Vancouver, now 3-5, has a lot to think about where they currently sit in the standings and if you can really make any more changes to this team roster-wise. A coaching change shouldn’t be out of the realm of possibilities.

Callum Crawford continued his breakout season, scoring a goal and six points overall, while Logan Schuss and Rhys Duch also went for six points apiece. There was some suspicion as to who would start the game for Colorado after Alexis Buque struggled when Colorado was last in Vancouver, and they ended up splitting after Buque took over for Ward in the third quarter. He made 11 saves in relief.