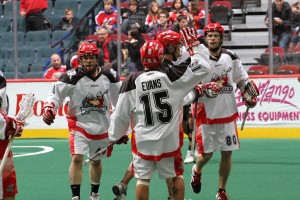 Following a busy week of trades in the NLL, the Calgary Roughnecks have traded reigning league MVP Shawn Evans to the New England Black Wolves for up-and-coming forward Tyler Digby. As a result of this move, the Roughnecks are now in full-blown rebuilding mode, with the chances of them continuing their unbroken string of playoff appearances diminishing steadily.

Evans just came off the best offensive season in NLL history, destroying the previous record for points in a season by tallying a whopping 130 (the previous record of 116 was set by Colorado Mammoth forward John Grant Jr. in 2012. Evans is now one of only two players in league history to pick up 100 points in three consecutive seasons. He is still in the prime of his career and could actually be capable of improving upon last year’s numbers.

Calgary will now be entering the 2016 season without their top scorer (Evans), the NLL’s all-time leader in faceoff wins (Geoff Snider), their best perimeter shooter (Daryl Veltman), and their team captain from the last five years, Andrew McBride, who announced his retirement earlier this month. Even in spite of the talent the Roughnecks were able to acquire in this year’s draft, that is a lot of leadership to lose in a single summer, especially following what was a very poor season for the team in 2015.

From the sounds of it, Evans may have forced Calgary’s hand by requesting a trade closer to his hometown of Peterborough in order to spend time with his young children. Calgary GM Mike Board said, via the Calgary Roughnecks website, “Shawn expressed a strong desire to play closer to home and his young family of three daughters including 14-month-old twins. We feel this deal is one that is good for both the organization and Shawn.”

In a league such as the NLL, where salaries are nowhere near significant enough for anyone to live off of, this kind of thing happens several times a year and that’s just the reality of the sport—athletes are essentially playing for the love of the game, not the money, and sometimes life dictates how much they play and where. As a result, some teams are able to get their hands on talent that they otherwise might have had no chance at while other teams are forced to let go of athletes they’d love to keep.

You can’t really blame the teams or the players for this—it’s a simple economic reality of the game as it currently exists.

Digby is a good player with a ton of upside, but he’s not a contender for the MVP award, nor is he likely to become one simply by moving from the Vancouver Stealth to the Calgary Roughnecks. Even if he continues to progress in this, his third season, and becomes a 90-point player, in the top 15 in league scoring, he’ll still be 40 points behind Evans’ output from last season—that’s basically another player’s worth.

There’s also the X-factor that Digby might also request a trade in the not-too-distant future: as noted by In Lacrosse We Trust’s Owen Munro, he’s living in the Unites States and has ties to his alma mater, Robert Morris, in Pensylvania. So adding a kid who might ask for a trade to take the place of a guy who asked for a trade is a gamble.

Calgary now has to figure out how to make all this work. Digby is a big, strong kid with a scorer’s touch, so he’ll contribute right away, but the Roughnecks will probably be happy if they get 75 percent of Evans’ production out of him. That leaves the burden of making up for all that lost offense on their three veteran forwards—Curtis Dickson, Jeff Shattler, and Dane Dobbie—and a couple untested rookies in Wes Berg and Reilly O’Connor.

They’ll all be expected to share the load, but Shattler is coming off his worst offensive season since 2010 and may be past his prime and Dobbie’s production dropped off by more than a point per game in 2015 compared to 2014. “Superman” Dickson has improved his point totals in every year of his career but it remains to be seen whether the sniper can evolve his game to become an elite playmaker in addition to being an elite scorer in the absence of Evans.

That’s not even getting into the question of how they’re going to make up for Snider’s absence—which will cost them at least four possessions per game—and the lack of a tested floor general with the departure of McBride.

In a league as competitive as the NLL, entering the season with a bunch of question marks is a recipe for disaster. Unless the rookie class is able to jump in and make a big impact from the get-go, the Roughnecks are going to have another long, difficult year ahead of them.