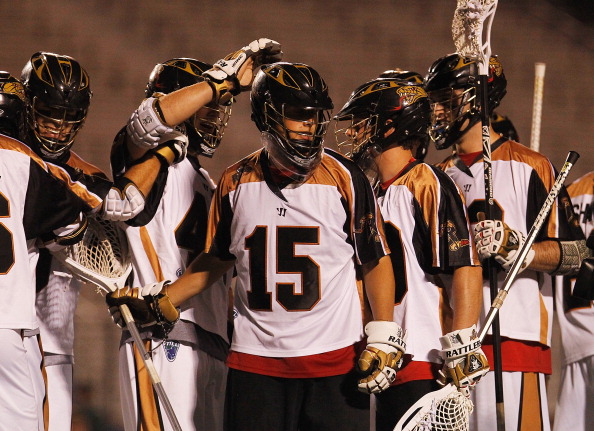 Continuing the In Lacrosse We Trust One on One series we keep our goalie and native New York theme we sit down with Rochester Rattlers’ goalie John Galloway.  He was one of the most decorated goalies coming out of college.  John won two national championships as the starting keeper at Syracuse in 2008 and 2009 as well as a two time All American and two time Academic All American.  He was the Rattlers Rookie of the year in 2011, the Warrior 2014 Goaltender of the Year, and a 2015 MLL All Star Selection.  These are just a few of his accolades and barely do his career justice.  Thank you for taking time to speak with us, John.

The Rattlers are a team really make an effort to hang out as much as possible.  Can you talk about the team culture in Rochester (Ratz with Hats)?

One of the biggest challenges in the MLL is developing a team culture. With our short time spent, it can be tough to develop true bonds. We have not gone to the MLL championship two years in a row based on talent. We have been able to go because the guys truly love each other. Unfortunately, the MLL expansion draft is going to make this difficult, Couch Soudan and Coach Monte have fostered an atmosphere that makes our comradery a priority, not just a component.

Your team has been one of the top teams in the MLL for the past two years.  You are knocking on the championship door.  What do you feel it will take to kick the door down and lift the cup?

The last two years have been character builders for our team. While we would love to have hoisted the trophy, we also have learned about ourselves. We have a tremendous blend of veterans and new guys. This year, we know we can’t settle for what feels like is going right. We must continue to find ways to improve, even if we are having success. Players and teams continue to peak in this league, and I am excited to make sure we continue developing as a team until the very end.

The Rattlers are a nice mix of indoor influenced offense and an incredible defense.  How much fun is it being the Rattlers defensive leader?

I love being on our defense because it has a number of leaders. I don’t have to try and overextend myself because we have All World type leaders in Joel White and Mike Manley. We have high IQ guys in John Lade and Will Khoshansky. Our rope unit is down right talented with some of the best SSDMs in the league and our unsung hero, John Locascio. These guys make leading a privilege, not a chore.

My experiences as a coach and a player allow me to provide a different perspective that allows me to provide some validity. I believe the guys I coach at PC respect the fact I still play and allow me to relate to them on a more personal level. I understand the locker room, the nerves and the heat of the moment. Conversely, I have been able to bring the concepts and teaching components that coaches think about on a daily basis to our defense. Coach Monte and I work together to gameplan and identify the most crucial pieces of the game we need to focus on. I feel more prepared in both levels because of my experiences. I think that will only get better.

You have two of the most physical and athletic SSDMs in the game.  We talked about it briefly on the Conference Call before the championship, but can you elaborate how they allow your defense to be so good?

Our SSDMs allow us to execute in so many different ways. Donny Moss is one of the best kept secrets in the MLL. He buys in to whatever we do and does so with a workman like attitude. Jack Near is downright special. The kid could play offense on most teams, but buys into his role and does it full speed. These two guys will allow us to continue to overachieve on the defensive end of the field.

You played at legendary high school program West Genesee.  Can you relate to us what it was like to play at that program?

Playing at West Genny has opened every door I have had in the lacrosse world. Coach Messere and Coach Deegan taught us not just about lacrosse, but about how to be a man. Because of my time in high school, being late is not an option. They taught me how to be disciplined to my craft and to do so with respect for everyone else. I am forever grateful for the values they instilled in me. I will continue to play and coach with the concepts and values I was taught at West Genesee.

Goalies tend to be natural leaders.  You are known for your leadership on and off the field.  Is this natural or have you had to work on this trait?

I have had to work on this trait and I still am learning. When I was in HS and college, I may have been too pushy. Even in the MLL, I lose myself and lead negatively. Being called a leader of a team is one of my most proud accomplishments. I want to continue to lead positively as I gain new experiences and I want to make sure that I earn the respect of my teammates before I do that.

What are the traits you look for and try and develop in young goaltenders?

The number one trait I look for in our goalie recruits is confidence. I can teach a lot of the techniques and concepts of playing goalie, but teaching confidence is nearly impossible. Guys that go in net with the belief they are going to be great often will do better than not.

Who has better outlet passes? You or Scott Rodgers?

I would say Scotty is definitely a better ball stopper than me, but I think I could challenge the big man to an outlet duel!

How do you feel about expansion?

While I do hate that we are losing a lot of the core of our team, expansion is great for both the MLL and the sport. The more markets we can reach, the sooner people will realize how special our league is and how talented our pool is. Right now, there are enough players to field AT LEAST 12 teams. I am excited more guys are going to get their well-deserved chance.

Where do you see the MLL in five years?

I hope I see the MLL thriving on the west coast. I believe with the level of talent and constant spread of the sport, we are destined to crack the west. I also believe we have to find a way to play on more attractive dates. I would love to see the league work alongside the NLL to separate conflicts. I also think we can work with college lacrosse to drastically improve events and attendance. The MLL should be playing every playoff weekend. We should be having a league showcase on Final Four weekend. These improvements will expose our amazing league talent to the masses!

Your goals for next season?  Team goals?

My goal individually is going to be two-fold. I want to have a save percentage north of 60 percent and I want to lead positively and constructively regardless of atmosphere. As a team, we have one goal in mind; finish the job and win the MLL Championship.

Now you get to ask me a question!

As a fan, what is one thing you wish the MLL would do to provide you more access to the players?

I have to say that the MLL does a great job at making the players accessible to the fans.  It is like no other league in the world.  It shows how the lacrosse community is really a family.