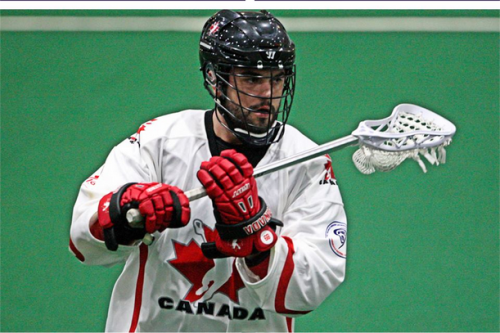 Today the Iroquois Nation and Canada face-off for the gold medal in the FIL-World Indoor Lacrosse Championships.  This time they are looking for a different result.

Since it first started the Iroquois have finished second and the Canadian National team has finished first.  What better way to end the streak, but to win it on your home soil.

These teams met in the preliminary round, Canada was victorious 11-9, after out scoring Iroquois 4-1 in the final period.

Shawn Evans (8G/24A) leads Canada in total points, while Mark Matthews leads the team with  14 goals.  Matthews also has 12 assists.  Dhane Smith and Ryan Benesch have twelve and ten goals respectively, while four other players have chipped in with five goals apiece.

This is a team that is heavily stacked from top to bottom.  They are so deep, they can sit a couple players and still not miss a beat.  But this team is just as strong in goaltending as well.

Aaron Bold, Matt Vinc, and Brandon Miller, who are all finalists for Gialtender of the Year in the N.L.L. have a combined save percentage of 86 and are getting stronger and stronger each passing minute.  They went 4-0 in the preliminary, winning by scores of 11-9, 19-2, 18-7, and 19-2, then in the semi-final they defeated Israel 19-3 to advance to the gold medal round.

Canada knows this will be a different Iroquois team they will face then the one they defeated earlier in the tournament.  Any mistake, any bad penalty, any missed ground ball can cost you a victory, and if Canada wants to win its fourth gold medal, they will have to play mistake free.

For the Iroquois to win and finally capture gold, they have to play better then mistake free.  They have to be flawless in the game if they want to be the best.

Can they do it?   Sure they can, and what better way then on their own soil.

My Prediction:  Close game until the end, both teams will battle and make this a game to remember, but Canada will prevail 14-11.