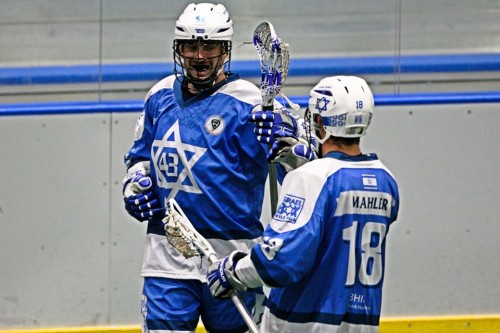 The bronze medal game is set for 1pm today at the SU Carrier Dome. The matchup will see Team USA take on WILC newcomer Israel. Israel will look to cap off a Cinderella story of sorts, never before have we seen a first year national team win a medal in FIL indoor or field lacrosse, so Israel will look to make history. This will mark USA’s third time playing a bronze medal game at the WILC’s, and each time they defeated their opponents to come away with the bronze.
Arguably Israel’s best game of the tournament was in the quarter finals when they played a highly contested game against former 4th place finishers Czech Republic, where they came away with the 13-12 win. Israel played a very good first quarter against Canada in the semi-finals, where they held the 3x gold medalists to just three goals and a two goal differential in score (eventually losing 19-3 however). Israel will look to veteran NLLer Chad Culp to lead the team to a WILC medal. He was instrumental in the win against the Czechs, putting up a seven point (2G+5A) game. Between the pipes will be Georgia Swarm goaltender Zach Higgins who’s looked very decent throughout the tournament. Zach Pall and Noah Miller will also look to have a big game against USA, they’ve already recorded several multi goal games and will be gunning for a repeat.
USA seemed to have had another lackluster WILC. For the fourth straight time they’ve been unable to get wins in the semis, and as a result will play for yet another bronze medal. Goaltending has been their biggest weakness, they’ll look to WLA rookie goalie David Mather and former Knighthawks back up Jake Henhawk. Their opponent seems to have the edge between the pipes, having starting NLL goalie Zach Higgins in net for Israel. Joe Walters and Joe Resetarits have been a shining light for the USA offense. In USA’s 17-10 loss to Iroquois, Walters and Resetarits were the only Americans to have a multi-goal game, putting up four and two goals respectivley. The defense will see NLLers Brett Manney, Joel White, and Chris O’Dougherty headline the back-end.
Can Israel get the upset win and become a first time medalist? If they do, it’ll be the first time in international lacrosse history that the United States has not medaled, which would be a disappointing outcome for a USA team that is being managed for the first time by US Lacrosse.