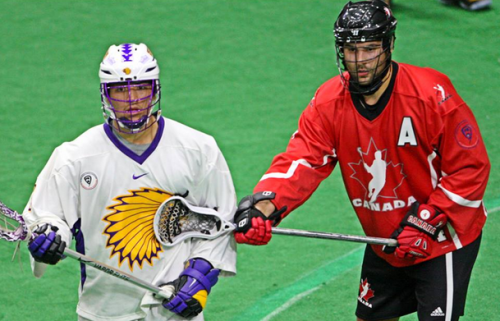 Last night the Iroquois Nationals knocked off Team USA 17-10 to win the right to play in the gold medal game Sunday at the Carrier Dome versus a skilled Team Canada.
While the score may not show it, the United States sure did hang in there with the Iroquois at various points in the game. USA came out to a string start scoring two quick goals only minutes into the game, both coming by way of Joe Walters from the outside. Their lead did not last long however, Brett Bucktooth scored a highlight reel behind-the-back goal to get Iroquois on the board, then seconds later Lyle Thompson delivered and knotted up the game at two.
After that, it was all Iroquois. Angus Goodleaf and the Iroquois defense shut out the USA offense for the rest of the first quarter, and he Iroquois offense sure did go to work, burying the next six goals uncontested. It wouldn’t be until late in the second quarter that USA would taste the back of the net when Joe Walters ripped one past Goodleaf to make it 8-3. Resetarits followed that up with a goal of his own for USA to make it a closer 8-4, and you could tell his goal sure did fire up the USA bench, and it did seem like there was a chance that the Americans might be able to make a comeback. However like before, Iroquois answered right back with three straight goals, and that third goal in the run (by Roger Vyse) ended up being the game winner, and all that Iroquois would need as they buzzed to an eventual 17-10 win.
Lyle and Miles Thompson were instrumental in the win, each getting a hat trick and adding several assists. Randy Staats also had a hat trick in the win, while Johnny Powless and Craig Point put up two goal games. For the United States, the only two players that stood out to me were Joe Walters and Joe Resetarits who both had five point games. The goaltending duo of Jake Henhawk and David Mather didn’t seem to be too effective against a stacked Iroquois offense, but Mather did show some promise at certain points in the game. Goaltending has always been the weak point for USA box lacrosse, but if Mather can continue to develop out west in the WLA, I think the future of USA box lacrosse goaltending is in good hands.