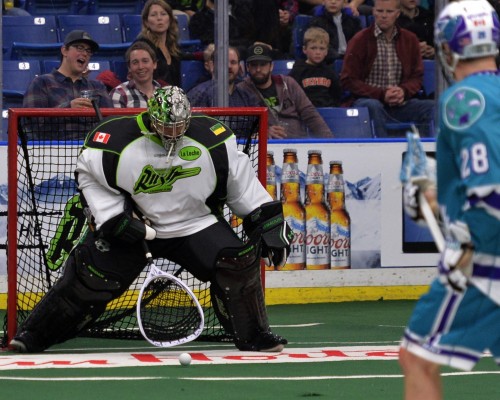 Coming of a disappointing overtime loss to the Buffalo Bandits, the Saskatchewan Rush have little time to regroup as they travel to Calgary to take on the Roughnecks in a rare Sunday afternoon matchup.

Both teams are coming off overtime losses and are looking to get back on the winning track. They have fallen behind the Colorado Mammoth for the West Division lead and although its too early in the season to start writing either of these two teams off, realistically the two will be battling the Vancouver Stealth for the final two spots in the west.

Although coach Keenan was disappointed and baffled by the porous defence against the Bandits, he is confident that the Saskatchewan defence will bounce back to its normal standard of play and provide better protection for Aaron Bold.

Even with better support, Aaron Bold needs to play much better if the Rush are to win against the Roughnecks. His performance against the Bandits was perhaps one of his worst in years.

Calgary’s last loss was at the hands of the Stealth in a game that saw them blow a 6-0 lead and surrender eight unanswered goals. It certainly was a learning experience to say the least. Just like the Rush, the Roughnecks need to protect their own zone and get stellar goaltending. “Play every shift like it’s a tie game and it’s an opportunity to do something great,” Carnegie said about staying in the game until the final whistle. “That’s what I’ve been preaching.”

Calgary also made a signing this week, as they signed six-year veteran defenceman Tyler Burton. Burton is an experienced player with previous playoff success as he was a part of two championship teams with the Knighthawks.

Expect a big, loud and hostile crown to make things tough for the NLL Champions in this important game for the home squad. Game time is 2pm MST at the Saddledome.