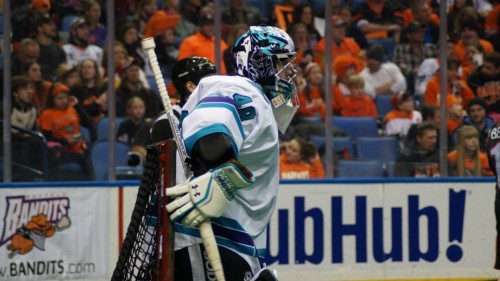 The Rochester Knighthawks have signed two more free agents in preparation for the team’s Training Camp, which kicks off on Saturday, Nov. 21st. The Knighthawks latest invitees are forward Mike Mawdsley (MAUDS-lee) and defenseman Adam Yee.

Mawdsley will embark on his second National Lacrosse League camp after working out with the New England Black Wolves prior to the 2015 season. The Toronto, Ontario native was selected by New England with the 31st overall pick in the 2014 NLL Entry Draft.

“It’s a good feeling. I am just looking for another opportunity to try to crack a roster,” he said. “It’s a very good team and I think I can learn a lot from those guys. Hopefully, I can make an impact with the team if I get the opportunity to (play there).”

This summer, the 23-year-old played for the Brampton Excelsiors and posted six goals and 13 assists in 16 games. Mawdsley also played in the Canadian Lacrosse League (CLax) and was named a Second Team All-Star. The Barrie Blizzard forward completed the season with 23 points (12+11) and capped off his first year in the Canadian pro league by winning the Creators Cup championship.

“I am from the area so it was nice to bring something back to Barrie,” he said. “The fan support was phenomenal throughout the playoffs. It was a good time getting back to Barrie and it was a lot of fun.”

Mawdsley has posted impressive numbers his entire career. At the collegiate level, he was a standout at Sacred Heart University. With the Pioneers, he finished his career fourth all-time in goals (113) and eighth in points (130). During his Junior “A” career, he put up impressive numbers with the Barrie Lakeshores. In 91 games, he scored 50 goals and added 61 assists for 111 points in five seasons (2009-13). After playing his rookie season in the Major Series in 2014 with the Oakville Rock, he was drafted by the Black Wolves. One year later, he will attend Training Camp with one of the most successful franchises in the NLL, the Rochester Knighthawks.

The Knighthawks have also invited University of Hartford defenseman Adam Yee to camp. Yee was thrilled to sign his first pro contract with his favorite NLL team. It was in college that he learned about the winning tradition of the Knighthawks from his teammates who grew up in the Flower City. Rochester was on his radar after hearing about the Knighthawks, which prompted him to see his first NLL game during last year’s Winter Break.

“I have always wanted to be a professional athlete since I was little,” he said. “Playing lacrosse is my one true love. There is no better feeling than getting that invite to Training Camp from Rochester. They were the first NLL game I ever saw. Right from the first whistle, I was like, ‘I want to do this and I want to play here.’”

Yee comes to camp after an impressive collegiate career at Hartford. With the Hawks, he collected 16 goals, 20 assists and 223 ground balls in 54 games. The Newtown Square, Pa. native was a two-time America East All-Conference selection (2013-14) and a 2014 NEILA All-Region Division I Second Team member.

In 2014, he recorded career-highs in goals (8), assists (6), points (14) and ground balls (112). He was also a force at the faceoff X, winning .557 of his draws. His winning percentage was the third highest in the America East and the fifth-best mark in Hartford’s Division I history. Yee admitted that Hartford was the perfect for him.

Because of that hard work, the 24-year-old Yee was accepted into the Syracuse University College of Law. It was after moving to Syracuse that he was able to break into box lacrosse. Yee, who is a Hualapai Native American, visited nearby Onondaga Nation to try out for the Onondaga Redhawks. It was after his first practice with the Redhawks, that he was sold on playing the indoor game.

“I was like, ‘I have to get good at this, this is a lot of fun,’” he said. “I like the speed and the physicality. I played a lot of d-middie at Hartford and snapped a lot of shafts cross-checking. I don’t have to worry about that anymore.”

After walking onto the team, he made his box lacrosse debut in June and quickly solidified a place on the roster, playing in over a dozen games en route to a Senior “B” Can-Am championship. Yee also appeared in three games in the President’s Cup tournament.

Playing the indoor game was a change of pace for Yee. He learned pretty quickly to transition the ball more and to take it to the net.

“On a fast break, when I first started out, I would pull the ball out,” he said. “They were like, go to the cage, go shoot and score a goal. Once they said that, I was in love with the game. This is the lacrosse I have always wanted to play.”

In less than three weeks, Yee will make another trip to Rochester to see the Knighthawks. This time, however, he will be on the floor instead of in the stands. With just 17 days left until the start of camp, it’s all business for the full-time law student. To prepare for camp, Yee has been playing in a local box league, playing twice a week at the Pavilion in Onondaga and hitting the gym after class.

“It’s going to be a dream come true,” he said. “It’s also going to be the most humbling experience I am ever going to walk into. If I want to be exceptional at this level, there is some serious work that needs to be done.

“You can never be satisfied with anything you are doing because somebody out there is working harder than you. If you can work hard enough to take that thought out of your mind, you are doing something right.”

On Saturday, Nov. 21st, Yee and Mawdsley will join several free agents and draft picks, and over 20 returning veterans at Total Sports Experience in East Rochester as the team begins preparing for its 2016 NLL season.