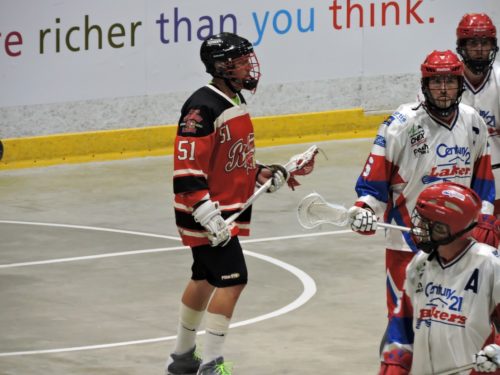 Saturday, June 25 was a big day in Durham Region – declared by the mayor of Whitby to be “Lacrosse Day in Durham.”

The grassroots organization Lacrosse in Motion, which is made up of eleven different lacrosse clubs in the region, put together what they hope will be an annual event featuring the best Durham has to offer in lacrosse. For those unfamiliar with Ontario geography, Durham is the area East of Toronto and is made up of Pickering, Ajax, Whitby, and Oshawa, as well as many smaller towns and municipalities.

The event was held at Iroquois Park Sports Centre, the crown jewel of athletic facilities in Durham. IPSC features six indoor pads (some have ice year round for hockey but some are drained for the summer), as well as outdoor facilities like baseball and soccer fields. The site hosts the annual Ontario Lacrosse Festival in August, bringing in thousands of families and millions of dollars to the region. Canada’s national champions in PeeWee, Bantam, and Midget boys lacrosse are usually crowned during that tournament.

Saturday’s event was much smaller than the OLF although Lacrosse in Motion already has plans for enlarging the event in 2017 and having it coincide with celebrations for the 150th anniversary of lacrosse in Canada.

The day started at 8:00am with a midget all-star showcase. Any players at the midget level could participate for a $25 fee. Vendors were set up all over the property selling various lacrosse related merchandise – equipment as well as team swag. All games were played on Pad 1, the largest pad with the most seating – the home floor of the MSL’s Brooklin Redmen.

Club teams took over at 11:00am beginning with a game between the Jr B Clarington Green Gaels and the Brampton Excelsiors. It was the first playoff game, which the Gaels won with a ridiculous score of 22-1. Shots were 69-12 in favour o the Gaels. Clarington finished first in the league; Brampton barely squeaked into the playoffs. Jeff Fernandes led the Gaels with three goals and nine assists.

The Sr B Brooklin Merchants took on the Oakville Titans at 2:00pm. Brooklin won 13-4 with Bryden Curran recording a hat trick.

The third game featured the Jr A Whitby Warriors versus the Peterborough Lakers at 5:00pm. The Lakers took a 3-2 lead into the second period and managed to double up the Warriors but Whitby then went on a six goal run to lead 8-6. They added four in the third to Peterborough’s one to take the game 12-7.

The marquee matchup of the day was the MSL’s Brooklin Redmen versus the Peterborough Lakers in a battle for first place. Organizers had high hopes for Durham teams to go 4/4 on the day but the Lakers came in looking for revenge on the Redmen for spoiling their home opener earlier this month.

Unfortunately for the Redmen, the Lakers were the stronger team on this night winning 14-6. The Redmen took a 1-0 lead early but the Lakers roared back for six goals in three minutes. They led 6-2 after the first and 10-6 after the second before Matt Vinc shut them out in the third. Chad Culp and Mark Steenhuis led the Lakers with three goals each. Shawn Williams led the Redmen with two goals.

“We have to match their effort,” Williams said. “Peterborough definitely outworked us in all facets and that was obviously the difference in the score. You have to come to work against these guys.”

Although IPSC was busy all day, attendance for the last game of the night wasn’t much more than the Redmen usually get. About a third of the fans in attendance were also cheering for the Lakers.

Regardless of attendance for his own game, Williams had nothing but praise for the whole day.

“I was here for most of the day. My son was playing in the midget showcase. We watched the Gaels and some of the Warriors. It was an awesome day, it was great. It’s fantastic when you see great lacrosse all day long in one place and it was lots of fun. That’s what you’re hoping for when you put something like this together. Hats off to the Lacrosse in Motion team. They did a great job and it was awesome to be part of.”