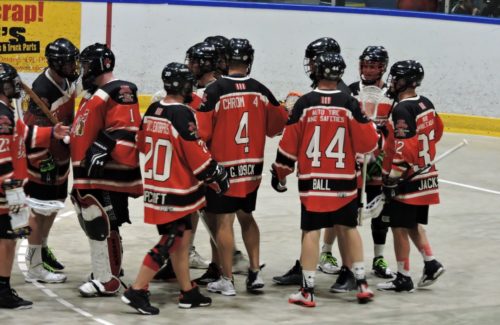 A day after the Brooklin Redmen dropped a 10-7 decision to the Six Nations Chiefs at the ILA they came roaring back to defeat the Cobourg Kodiaks 16-7 at Iroquois Park in Whitby.

Recent trades strengthened Brooklin’s defense and Chris Corbeil and Kyle Rubisch made their debuts for the Redmen on Wednesday night. The Kodiaks showed flashes of offensive desire that kept the score close in their two prior meetings, but defensive breakdowns of their own on Wednesday night allowed the Redmen to run away with the game.

“They’re two of the best in the game at what they do and we’re very fortunate to have picked them up and they’re only making our defense better,” Dan Lintner said of the new additions.

Lintner had six goals for the Redmen including three in a row in the second period. He had one power play goal and one shorthanded marker.

“I was feeling good, I was getting my open lanes,” he said. “Mark Matthews was finding me and everyone else was finding everyone so we had a good start and finished off well.”

The embattled Kodiaks scored first but couldn’t hold a lead. They went on a three goal run to end the second period down only 11-7 but were shutout 5-0 in the third. Maybe if Corbeil and Rubisch hadn’t been on Brooklin’s back end, the Kodiaks would have had more success. Maybe if the Kodiaks had had more than 15 runners. Maybe if they hadn’t been missing Mike Woods, Eric Guiltinan, and Tyler Roche, three of their most consistent defenders. Maybe, maybe, maybe. The Kodiaks did tie the Redmen earlier in the season so a competitive game wasn’t out of the question. They were right in it until the third period, and at least showed more emotion in the third than has been seen recently.

Lintner said the Redmen take every game seriously despite the difference in points between themselves and the Kodiaks.

“You never really like to come in to a game thinking one will be easier than the next but by the looks of Cobourg’s record compared to Six Nations, yeah maybe you think it might be easier,” he said. “But you have to take every game the same, especially with their run in the second period. They pulled it close so you can never take any team lightly.”

Dylan Goddard led the Kodiaks with two goals. Matt Crough had a goal and two assists while Joey Cupido and Luke Laszkiewicz had a goal and assist each. Mike Triolo and Jordan Robertson each had a goal. John St. John added three assists.

With the win, the Redmen jumped over the Oakville Rock into third place in the MSL with 15 points, three behind league leading Peterborough. Cobourg remains in fifth with three points.

*Errors in the Poinstreak stats from this game have affected this story.