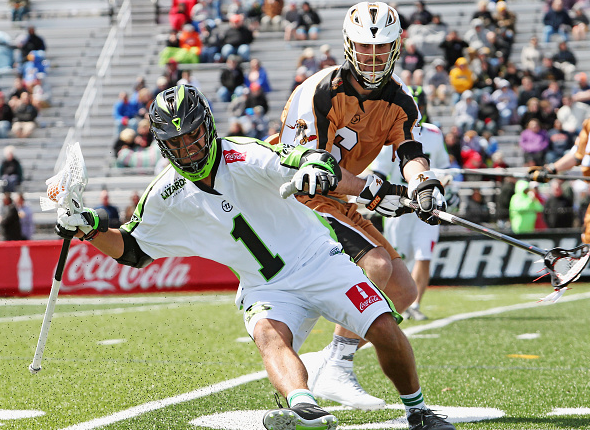 Championship week is finally here and it leaves one asking how the season went by so quickly, but the result is the Rochester Rattlers face the New York Lizards for the Steinfeld Cup.  This week’s conference call featured John Galloway of Rochester as well as Head Coach Joe Spallina and Greg Gurenlian of the New York Lizards.  First and foremost I want to thank those gentlemen as well as Mark Russ of the MLL for making time and giving us the opportunity to speak with them during a busy week.  Now let’s jump into what we can expect this weekend.  I always built teams from the cage out so it seems logical to start there.  The match up this weekend pits last season’s Goalie of the Year, John Galloway against this year’s winner, Drew Adams.  Both goalies have stood on their heads this season to bring to keep their teams in games and secure wins.  Look no further than last week as Galloway made 20 saves against the talented Ohio offense while Adams made several point blank saves to secure the win over Boston.  Watching these two square off would be worth the price of admission.  Galloway is a vocal and active leader with a sweet touch on outlet passes while Adams, the less vocal, has the ability to put the team on his shoulders and turn aside insane shots with regularity.

As for the men in front of the goalies, Rochester’s defense often receives more acclaim than their counterparts from Long Island.  After all, Mike Manley was last season’s Defensive Player of the Year.  Most analysts and prognosticators are quick to point to the Rattlers athletic defensemen and their ability to slide, support, and recover as opposed to winning individual match ups.  Even the Rattlers opponents point heap praise on the Rochester defense.  Despite losing Manley to a season ending knee injury, it has been next man up in Rochester according to Galloway as John Lade moved to the number one spot.  Joel White and John Locascio have wrecked havoc from the wings all season as the Rattlers opted to double pole the face off X.  New York, however, has this season’s Defensive Player of the year in Joe Fletcher and I dare anyone to say Kyle Hartzell is not athletic.  Brian Spallina is going for his seventh ring and all comments and wisecracks about his penalty minutes aside, the man has six championship rings.  He knows what it takes to win.  Many critics say the Lizards have not had to play much defense with Greg Gurenlian winning 70% of his face offs this season as well as setting record for face off wins and groundballs.  Gurenlian is a possession machine for his team, but the Lizards have played defense well enough to have the best regular season record, the Defender of the Year, Goalie of the Year, MVP, and a spot in Championship Weekend.  Rest assured with the Steinfeld Cup on the line, both teams will play physical and inspired defense.

Greg Gurenlian won the Face Off Specialist of the Year award and MVP, as well as setting league records, but he is quick to give credit to his defensive midfielders Kevin Unterstein and Steve DeNapoli.  Both players are threats to score and according to Gurenlian they make him “look good.”  Taking the Beast’s win percentage this season he looks pretty good and this trio gives New York an edge in the possession game.  Coach Spallina is confident in this unit and Chris LaPierre as they face the Rattlers duo of White and Locascio.  Rochester is not without its own defensive midfielders in Donny Moss and Mike Lazore, the men that allow White and Locascio to be on the wings during the faceoff.  I take some flak for the attention I give face off specialists and defensive middies, but that is where I Started and it always seems to come down to face offs and defensive middies in the MLL.  Both offenses can go on runs and put up points in a quick pace so possession and stops will be a key to victory.  Can White and Locascio keep Gurenlian, Unterstein and DeNapoli from playing “make it take it” while Moss and Lazore cover one of New York’s deadly attack men?  This battle between the lines will certainly influence the outcome of the game.

Both offenses are prolific as Rochester has the Offensive Player of the Year in Jordan Wolf while New York has the face of lacrosse in Paul Rabil as well as scoring machine Rob Pannell.  The Rattlers scored 12 goals against a very good Machine defense while the Lizards put up 7 goals in a quarter versus the Cannons.  Rochester’s roster has undergone the most change during the season as players returned from indoor and coaching commitments and the rookies joined the team.  New York has had one of the most stable rosters if such a thing is possible in the MLL.  The Rattlers are returning to Championship Weekend and have learned that they need to work as a unit and not rely on individuals to win.  The Lizards have the expectation of returning a championship to New York.  Both teams have expressed a mutual respect for their opponent this weekend and are playing for their teammates.  There will be incredible talent and passion to win on display this weekend.  Do not miss the opportunity to see some of the best athletes in the world compete for the biggest prize in the greatest sport!