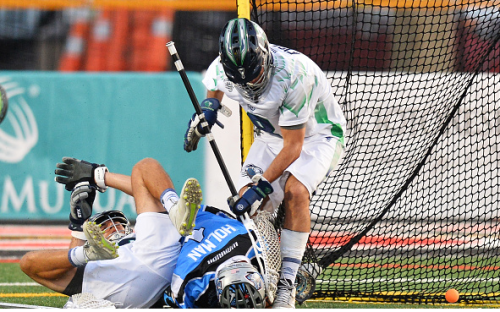 As this weekend’s games concluded, New York, Ohio and Rochester all clinched playoff berths while Boston stumbled on its quest to make the postseason.  New York came out hot against a Denver squad that struggled in its past two games.  The Lizards defeated the Outlaws 18-15 but the game was not as close as the score indicated.  Even with the return of Anthony Kelly and Geoff Snider to the lineup, Greg Gurenlian went into another realm of existence.  Most players would consider breaking a league record a career accomplishment.  Gurenlian broke two… in the same game.  The Beast set records for single season faceoff wins and ground balls as he went 30-35 at the X against two of the best the MLL has seen.  This dominance was partially reflected in New York’s 15-8 lead after three quarters and Rob Pannell’s five goals and two assists.  Only a seven goal outburst by the Outlaws in the fourth quarter brought the score within three, but the loss took Denver out of playoff contention.  New York secured the number one seed and home field for the first round of the playoffs.  They face a very hot Ohio team with a potent offense and a rematch with Denver who will look to avenge the defeat in the rain.

Ohio punched their playoff ticket by defeating the red hot Boston Cannons 19-12.  The Machine gave the Cannons a taste of their own medicine and used transition goals and Greg Puskuldjian’s faceoff dominance (21-29) to put the game away.  The first quarter went all Boston’s way as they put together a 4-1 lead, but then the Machine offense began moving the ball and scoring as the Cannons stalled.  Ohio scored eight goals in the second quarter as the Cannons went into a scoring drought.  The Cannons pulled themselves together and matched the Machine’s 10 second half goals with eight of their own.  Brian Phipps made 21 saves as he did his part in stoning Boston’s offense.  No matter how hard Boston tried they could not overcome the hole into which they dug themselves in the second quarter as Phipps turned away shot after shot.  The Cannons road to the playoffs is less certain after this weekend and they face a very dangerous Bayhawk team that gave them a close game last time they met.  Boston gets another crack at Ohio in the last game of the season and revenge will be on their minds.  The Cannons faced a veteran team that wants back in the playoffs because the Machine could taste how close they came to the title game last season.

In a close game the Rochester Rattlers defeated the Chesapeake Bayhawks 14-13 in a game that went down to the wire.  The Rattlers and Bayhawks matched each other’s goals in every quarter except the first where the Rattlers outscored the Bayhawks by one. It was really that close and came down the last 11 seconds as Rochester had to keep the ball away from Chesapeake.  Coach Cottle even requested a stick check on Jordan Wolf in the fourth quarter.  Tyler Fiorito continued his incredible run as a starting keeper.  Fiorito made 16 saves as he tied Greg Cattrano’s record of 206 saves in season.  Lawson, Rice, Ranangan, Wolf and Matthews (the players not the law firm) kept the Rattlers offense on pace with the Bayhawks.  Matt Danowski, Joe Walters, and Ben Rubeor led the Bayhawks offense.  Faceoffs continue to plague Chesapeake as Mike Poppleton went 19-31 from the X and help give the Rattlers the edge in possessions as both teams only went 1-4 on extra man opportunities.  Chesapeake faces Boston and Charlotte in their last two games while Rochester matches up with Charlotte and Florida.  The Rattlers are in while the Bayhawks have a very slim possibility to make the postseason.

In a rematch from last week, Florida defeated Charlotte 17-16 in overtime which moved the Hounds into sole possession of last place.  Florida is still in the hunt mathematically, but realistically the Launch is on the outside looking in on the playoffs.  Just like Rochester vs. Chesapeake game, the Launch and Hounds were matching each other’s point totals every quarter until Lyle Thompson scored the overtime game winner.  Brendan Fowler won the final round of the Faceoff Academy Civil was as he went 21-37 from the X.  Lyle Thompson had eight points (six goals and two assists) while Miles Thompson scored five goals and Kieran McArdle had five points (three goals and two assists) to lead the Launch offense without Casey Powell who was unavailable for the game.  Mike Sawyer appeared to return to his old form as he scored five goals and one assist while Kevin Cunningham put up two goals and three assists against his old team.  Terry Kimener and John Haus also chipped in three points each as Charlotte had one of its best offensive showings to date.  Even though neither team will make the playoffs they are starting to play some of their best lacrosse and that should make the final two weeks of the season interesting.  As fans, we can expect some more quality performances.