Ask four people who the league’s best goalie is. The chances of you hearing four different responses are high. Very high. Kip Turner, John Galloway, Drew Adams and Schwartzman are all phenomenal. In Part 2 I explained that there’s another handful of goalies, even after these guys, with whom you could win a championship. That’s why goalies are so low on my list. But why is Schwartzman the highest among them?

Lacrosse goaltending had turned into a “What have you done for lately” position. Trust and stability go a long way down the road with a keep

By any metric, Schwartzman has been trustworthy. The Outlaws and regular season success go hand-in-hand, largely because of him. How much of that is overshadowed by their playoff struggles? And how much credit should be given to Lee Zink and Matt Bocklet? I’ll cover that in a bit.

The 2013 Machine had possibly the most one-dimensional, over-crowded offense in MLL history. Lifelong attackmen Marcus Holman, Connor Martin, Chazz Woodson and Logan Schuss saw a majority of their time at midfield because, well, there weren’t really any midfielders on the team.

Seemingly overnight, the Machine became as versatile as a Swiss Army knife. Kyle Harrison, Tom Schreiber and Rob Guida will fill the midfield void. Holman will likely move down to attack with finisher Erik Krum and quarterback Steele Stanwick. The versatility lies with Baum and Schuss. The possibilities for this offense are endless because of these two guys.

Both Baum and Schuss spent significant time inverted this past year. They’ll likely run with either Harrison or Schreiber, who are both tremendous pickers. Schreiber’s coach at Princeton, Chris Bates, is a former professional box lacrosse player. Princeton’s offense incorporates lots of box elements. Midfield pick-and-rolls, pick-and-pops and slipped picks–you know, the sort of stuff the Denver Outlaws used heavily in their 14-0 season. Look for Baum and Schuss to be ball carriers in wing pick-and-roll situations. They have a nasty right-handed and left-handed sweeping shot, respectively, making them an excellent complement to either Harrison or Schreiber.

Last year Grantland’s Zach Lowe gave Milwaukee Bucks center LARRY SANDERS! all caps privilege for his electrifying shot-blocking ability. If anybody in MLL is deserving of my keyboard’s caps lock button, it is HARTZELL! He shoots 111 miles-per-hour and throws lethal stick checks. Since the emergence of Vine, HARTZELL!’s already-infamous rusty gate check on Ryan Boyle has become even more infamous.

HARTZELL! is SANDERS! with a longpole. His takeaways are emphatic and frequent. This over-the-top strip of Albert Maione is the exact criteria that earns an athlete the all caps privilege:

The all caps privilege is a heavy burden to carry. Shortly after SANDERS! earned the honors he was involved in a fight at a nightclub, engaged in a shouting match with teammate Gary Neal and got a tattoo of the word “Receive” spelled incorrectly. Now, he’s just Larry Sanders again. Please don’t do any of those things, KYLE. Embrace the responsibility of the caps lock button.

Steele Stanwick: I am standing up and I’m telling you, I am Marohl. I am the number one most impactful feeder of our generation. I am Tim Nelson in the flesh. Scott Montgomery. Joe Vasta. Dennis Fink. Now who’s gonna be the Medici family and stand up and let me create more? Or do you wanna marginalize me ‘til I’m out of my moment?

John Algie: But why don’t you empower yourself and don’t need them and do it yourself?

SS: You ain’t got the answers, John! I been doing this more than you!

JA: Doing what more than me?

SS: You ain’t been doing the passing!

SS: You ain’t been doing the passing! You ain’t played fourteen games with midfielders who can’t shoot!

SS: And that–and that ain’t no Poillon though. That ain’t Poillon level.

JA: It ain’t but let me ask you this–

SS: What’s up with all these attackmen? We don’t know. You don’t have the answers.

JA: I’m askin’ you for the answer, it’s a question. Why is it that you can’t? You don’t have the midfielders to feed, that’s the answer. You ain’t gotta turn up, man.

[Note: I can’t confirm that this conversation didn’t happen sometime this fall.]

He is the face of the game. He is Kobe Bryant. Minus the Shaq fallout. And the rape allegations. And plus some passing. What I’m trying to say is that Harrison can make $30.45 million per year, play less than 10 percent of the games, and nobody will say boo about it. People love him, and rightfully so.

On the field Harrison does it all. At Hopkins he was a 60 percent faceoff man. This summer he will play defensive midfield for Team USA. Off the field he is constantly touring the country and making appearances at lacrosse stores. He is dedicated to connecting with fans and growing the game. Having Harrison in the Midwest is beneficial for the sport. At this point in his career, he might not be as talented as Sam Bradman, but he was the right pick for Ohio.

Casual fans might not fully appreciate Bocklet and Zink. They’re dominant–but they’re quietly dominant. They don’t have the crushing body checks, cheek-wide triangles and waist length hair of a young Nicky Polanco and Brian Spallina combo. Bocklet and Zink simply get their jobs done. They have been the best defensive tandem in Major League Lacrosse for the last five years. There’s just one tiny flaw holding them back: the Outlaws’ lack of postseason success.

Blame it on the Pareto principle. We base 80 percent of our judgment on 20 percent of their work. Inconveniently for the Outlaws, it is the last 20 percent that we care about most. Poor endings can negatively skew our memories.

Look at the 2000s Indianapolis Colts, the post-Spygate New England Patriots, Season One of True Detective and Kanye West’s discography. Each was incredible, but each had a suboptimal ending. Not all of the endings were disastrous [Kanye’s was], but they all failed to match the level of greatness to which we had grown accustomed during the first 80 percent.

That’s been the case for Bocklet, Zink and the Outlaws. Luckily, the last 20 percent of their careers is yet to come. Polanco and Spallina have won two titles [and counting] together on the north side of 30-years-old. I really, really hope Bocklet and Zink do the same.

[Important note: Notre Dame athletics are an exception to the Pareto principle. The 80-20 aspect is still involved, but it has nothing to do with postseason play. As usual, the Irish play by their own rules. Instead, 80 percent of Notre Dame’s ranking is automatically colossally overrated because of stuff like “tradition” and Rudy. And 80 percent might be an underestimate.]

They say a picture is worth a thousand words. This Lizards’ Instagram post left fans with just one word on their mind. Crotty!! CROTTY?!?!? CROTTY!!!!! 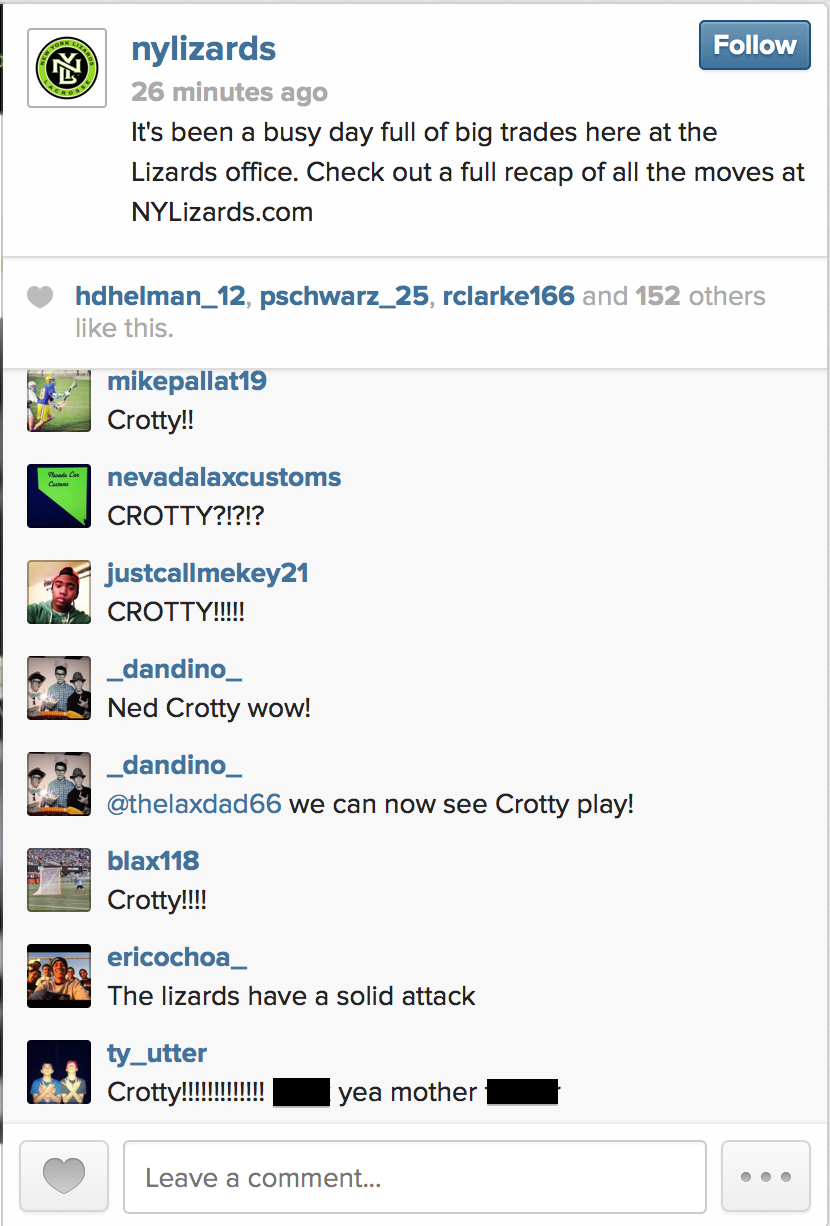 At the 2013 All-Star Game, his shot was clocked at 98 miles-per-hour. He didn’t finish first. In fact, it was significantly slower than Mike Sawyer’s world record 114 miles-per-hour rip. Yet, Sieverts belongs to the upper echelon of two-point shooters along with Matt Striebel and Kyle Dixon. So how does he defy a young, drugged-up Reese Bobby’s logic that “first” and “last” are collectively exhaustive?

Sieverts’ shot in that skill competition was much like his actual shot. Most players have ridiculous crow hops and wind-ups. They take advantage of the infinite time and room to maximize their score. Sieverts just kind of shoots. His 98 miles-per-hour score is genuine; that’s fairly close to what you’d see from him in a game. That is what makes him the best two-point shooter under 29-years-old. [And the second-best two-point shooter under 35-years-old.]

Some people love the two-point line, some people hate it. Regardless of where you stand, here’s a brief version of a proposal of mine [click here for the full explanation]:

Very few players can shoot two-pointers. That’s because there isn’t much prime real estate beyond the arc. Once you step inside angles more acute than 45-degrees, you’re preparing yourself for failure. The NBA trims its three-point arc out of necessity; an equidistant arc wouldn’t fit comfortably on the court. Lacrosse should trim its arc out of practicality: 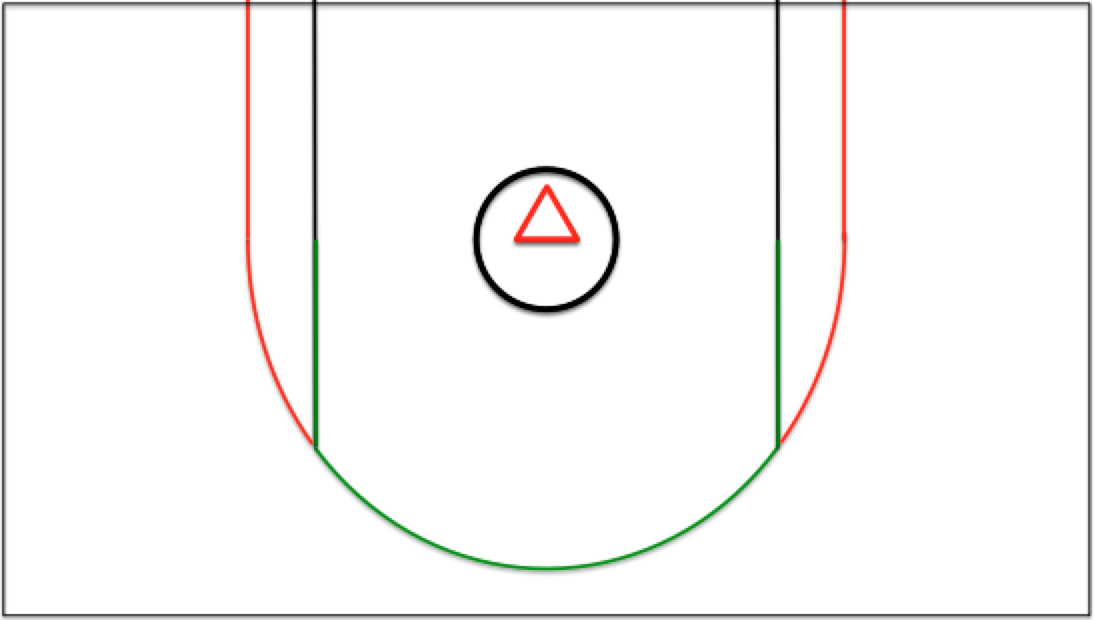 Make the arc extend 10- or 12-yards off the pipe instead of 16-yards. Obviously, shooting from GLE is still not sensible, but a two-point shot from the wing now has legitimacy. I don’t want two-point goals to increase dramatically or to take over the sport; I want them to become higher percentage shots so that teams lacking All-World shooters like Sieverts, Striebel and Dixon aren’t at a drastic disadvantage.

Like the Crotty trade, the Merrill trade produced passionate social media reactions. Instead of fans, it was Merrill’s former teammates who tweeted. They were about as happy as you’d expect players to be after hearing an all-time great was traded from their team.

How can a team with no GM in place yet, trade away two marquee players in @jwalters1 and @BrodieMerrill_ #loveCPthough #justsayin

If you have a question or idea for Joe, e-mail him at joekeegan21@gmail.com! Include your first name and hometown. You could be featured in his next mailbag column!