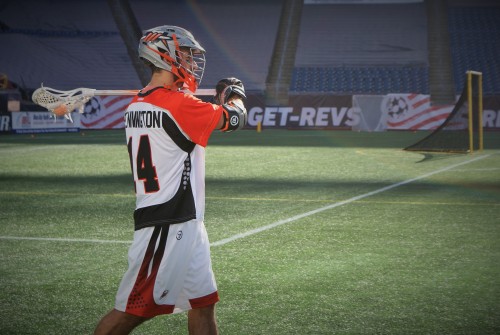 The road to .500 goes through Ohio when the Machine and the Outlaws faceoff in week 2 of the Major League Lacrosse 2015 season. The Machine and the Outlaws renew their rivalry after a pair of thrilling games last year. Denver beat Ohio in the Mile High City to the tune of 14-12 on Star Wars night (May the 4th, get it? GET IT?!). When the Outlaws visited Ohio they came up short in overtime in the highest scoring game in the league last year with a final score of 23-22 in favor of Ohio.

How we got here:

Last week the Machine got off to a hot start against New York, but if this game were a foundry the Lizards were the blacksmith, dunking the red hot machine in water and then banging away at the tempered metal until it was forged into the shape of defeat. The Lizards dropped 14 on the Machine and goalie Brian Phipps managed 17 saves (54.8%). This is to say we can’t point the finger solely at the goaltender in this situation. Ok, I realize that in the hierarchy of reptiles this New York team is more of a fire-breathing dragon than a gecko, but still 31 shots on goal is a lot. Denver’s offense isn’t as potent at New York’s at this point in the season, but they’re no slouches either. We’ll have a better idea after this game whether Ohio’s defense is a wet paper tiger or something a bit sturdier.

Denver was 30 seconds away from winning in Boston last week. Unfortunately those thirty seconds came in the third period and brought two 2-point goals with them. If loose lips sink ships, then what do loosely guarded midfielders produce? If you think that B.J. O’Hara’s squad didn’t get an earful (or three) for those defensive lapses then you’ve never played organized sports. Hell, I’m willing to bet once Jesse Schwartzman was finished beating himself up about letting those goals in he wasn’t shy about mincing words with his support staff (or lack thereof).

Peter Baum and Drew Snider are currently tied for the league scoring lead with identical stat lines of 3 goals and 2 assists. Expect both players to build on those totals on Sunday.

It will be interesting to see how to Machine fare in another game without Logan Schuss in the lineup. His absence means that the Machine can’t stretch defenses as much as they would like. Add into that equation Bobby Dattilo’s struggles at the faceoff dot last week (7 for 21) and things could be an uphill struggle for Ohio. Anthony Kelly went 17 for 31 last week, and the Ohio-native will be playing on home turf so don’t be surprised to see a well-rested and dominant A Train in this contest.

Don’t expect the same drop off in production this week that the Machine had last week though. No doubt the wrench has been removed from the gears and everything is lathered in WD-40, you know, just in case.

Denver defenseman Max Schmidt gets an opportunity early in the season to face his old team. If the Incredible Hulk played lacrosse he’d be Brian Spallina. The Machine faced him last week and now they’re going to have to go up against what I can only assume is an angry Dillon Roy. Has anyone heard from Dillon Roy since the loss against Boston? I feel like he’s in a lab surrounded by bubbling beakers and tesla coils plotting his revenge on the next unsuspecting opponent.

Oh, and remember those 2-pointers that Schwartzman let in? Don’t expect to see a sequence like that again any time soon. I don’t care how grippy the balls are this year.

Don’t expect the Machine to roll over like they did against New York. This will be a hard fought game that isn’t shy in the scoring department.