Hello again everyone, I am back with a new update from the Can/Am league and the Rochester Greywolves. Itâ€™s been a few weeks since my last post and there has been a lot that has happened so Iâ€™ll cut the chase and get right into it.

Two weeks ago the Greywolves faced off Vs. the Newtown Golden Eagles who just recently finished the regular season in first place. This game was special because the Golden Eagles acquired three of our best players in the off season: Josh Kaperzak, Bobby DeFreeze and my StickHorse teammate Ryan Maciaszek; all from Rochester and who would be playing against us at home for the first time. Â Right out of the gate the Golden Eagles proved why they are the team to beat in the Can/Am winning the gameâ€™s first face-off and taking it straight in for a breakaway against me which luckily I stopped. (Wipes sweat from forehead.) The onslaught continued for majority of the first period and I felt fortunate and appeased with my play to get us out of the first period down 2, 6-4.

The second period was much more even and hard fought; we traded goals and penalties for the duration of the 2nd and went back into the locker-room with a 2 goal deficit at 10-8. While poised to make our run in the 3rd we were not so fortunate as untimely penalties would get us in trouble and cost us against a veteran team like the Golden Eagles. The final result was a 14-10 loss for the Wolves, but definitely a good litmus test going into the playoffs against the premier squad in our league.

The next day we got the night off sort ofâ€¦. The Alleghany Arrows were on the schedule to come to town and play us at home. Unfortunately this isnâ€™t always the case in Senior B and the Arrows were without a goalie forcing them to forfeit the game for an easy win for the RGW. Not one to waste any time â€“ coach Bazylewski immediately made good use of our floor time and put us through a solid practice to finish the weekend and look ahead.

Last weekend I did not make the trip to Western, NY; however there was much going on up there. To start off the weekend, we had a game in Six Nations, Ontario Vs. the Slash. Due to border constraints only a handful of our guys were able to make it up to the reservation and we were handed a tough loss by Six Nations 19-4 with our abbreviated lineup. Â On Saturday night, the Can/Am All-Star game was held at Gil Lay Arena on the Cattaraugus Reserve and was attended by many Can/Am fans as well as CLAX officials like Toronto Rock legend Jim Veltman. Shout out to the 4 Rochester Greywolves who made the squad: Steve Personale, James Schutt, Sean Gilles and Brian Sutton. 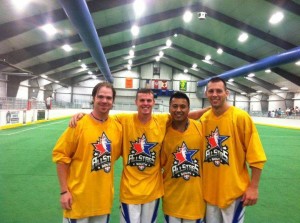 On Sunday, the Wolves made it out to Alleghany where this time they did have a goalie and we were able to grind out a solid 14-4 win, giving us our first winning season in Rochester Greywolves history with a final regular season record of 9-8-1.
Whatâ€™s next? Playoffs (insert stupid Allen Iverson comment here). Finishing the league in 5th place we have drawn the 4th seededÂ Tuscarora Tomahawks in the first round which kicks off this Friday in Niagara Falls. For me personally I am super pumped to play Tuscarora in the first round and hopefully get an opportunity to avenge the loss they gave us a few weeks back up in Niagara. This weekend will definitely be a battle and all of us Wolves are looking for our first Can/Am playoff series victory as an organization.

Next â€“ we have an â€œIn Lax We Trust – Paparazzi EXCLUSIVEâ€:
Iâ€™d like to welcome the newest edition to the StickHorse family â€“ Baby RPM â€“ Rylyn Paige Maciaszek 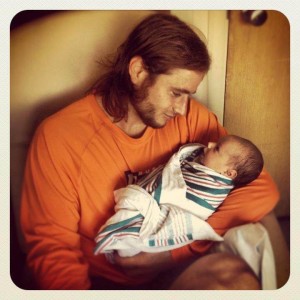 In Lax We Trust was fortunate enough to broker an exclusive deal for the first public photos of the future Womenâ€™s lax phenom â€“ edging out other publications like â€œUS Weeklyâ€ and â€œIn Touchâ€ in a major bidding war. Congrats to my StickHorse brother RPM and Ms. Stefanie â€“ I love you both very much and may the lord bless baby Rylyn always. Keeping it in the StickHorse family I would also like to wish our Owner Mr. Tony Chase a very happy birthday as he shares one with myself on perhaps the most handsome day of all time July 17th and of course a birthday shout out to my mentor and best friend Ginny â€œThe God-Motherâ€ Capicchioni, who has her own B-Day today – July 18th.

And finally Iâ€™d like to share with you all a video of a former teammate Tony Scorci and the work he is doing to spread the game. Tony is a former Buffalo Bandit and Portland Lumberjack who I had the privilege of playing with on the U.S. Indoor Developmental team. Tony is a consummate professional and someone I have always looked up to for the way he handles himself and the way he treats the game.

Many people hear the concept of â€œrespecting the gameâ€ but no other sport embodies this thought like the game of lacrosse and very few players have exhibited this belief like Tony Scorci â€“ someone who in my experiences has always led by example and brought a blue collar attitude to the floor, every game, every shift. Tony is currently teaching and coaching lacrosse at Vermont Academy and I was shown this video earlier in the week and it totally blew me away. Every week I always end my blogs with â€œSupport American Box Lacrosseâ€ but on a broader scale, it is important to support the game in any form. I know I can speak for Tony as well as myself when I say that some of the most rewarding experiences of my life have come from this game â€“ and when I am finished playing I hope I can contribute and give back just like Tony is â€“ leading by example always. Until next time â€“ you know what to do â€“ keep spreading the game â€“ and LETâ€™S GO GREYWOLVES!