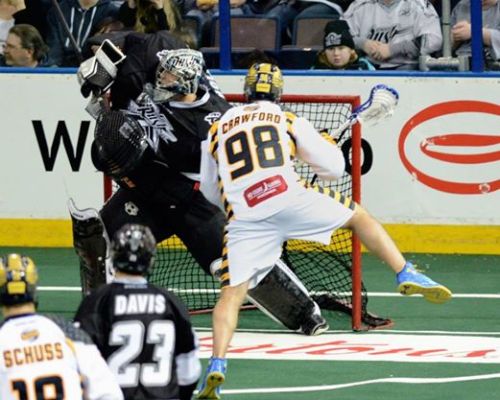 The Georgia Swarm seem to be losing players left and right to the open market, but the biggest and most notable will have to be wily veteran forward Callum Crawford. He has big the most consist offensive force for the Swarm over the last few seasons. In six seasons with the Swarm Crawford garnered 503 pts in both the regular season and in six playoff games. Crawford will be the most missed asset the Swarm have lost this offseason. Crawford signed with the Colorado Mammoth in early August, to the tune of a three year deal.

Crawford is a type of player that makes everyone around him much better. He was primarily a set up man and in the last two seasons he had a rotating group of ultra-young players around him to get the ball to. Players like Logan Schuss, Mile Thompson, Shayne Jackson, Kiel Matisz, and Johnny Powless. Schuss was traded part way through last season for Powless, Thompson was somewhat streaky through the season, and Matisz was moved to more of a transition player than the forward he had been playing. Crawford’s ability to find open players all over the floor has gained him quite a bit of notoriety over the last half decade in Minnesota.

The Swarm will need to make a concerted effort to replace the points lost. They do have a three top five picks in the Draft and four in the first ten. The best option the Swarm will have is drafting  Jesse King, Lyle Thompson, Wes Berg, Turner Evans, or Randy Staats. Realistically the Swarm will need to get two or three of the group. Thompson, King and Berg would be the most obvious choices to draft at 1, 3, and 5. Thompson would fit well with Miles after playing college and senior box together, they also play off of each other better than just about any other two man groups on the floor. King is a tank that can’t sling the ball around and can score left, right and center. Berg is a smaller forward but has deadly stick skills and could be a major scorer in the NLL, he also plays a lot like Shayne Jackson which gives the Swarm a depth aspect and consistency throughout the lineup.  The Swarm could also try to go a bit deeper in the draft to find some good young players to fill the gap, players like John St. John, Mike MacDonald, and Dane Sorensen.

The Swarm will not be able to fill Crawford’s place with just one player in their first season in Georgia. It will be a replacement by committee, whether from inside or outside it will be the biggest hole in the future of the team.