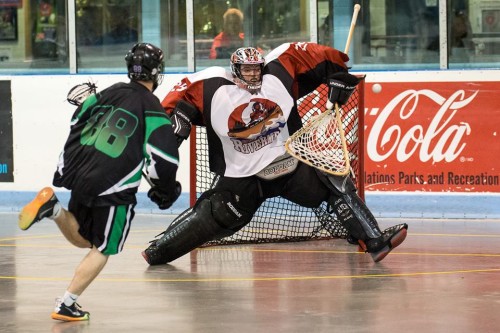 The Six Nation Rivermen get the first game victory over the Oakville Titans in game one of the Ontario SR B semifinals, 12-5. The Riverman jumped out to the 1-0 after a rocket of a shot from Corey Bomberry.

Oakville stuck around keeping the game close as they hoped to get the big upset but it was just not enough. As Warren Hill shut the door on Oakville stopping a string of shots as his defense also played a big role. Jacob Crans played stellar defense while scoring in transition, as did rookie Stu Martin.

NLL veteran Tommy Mounture has been a big help on the defensive end, as well as Rod Squire, Mike Miller and Isaiah Kicknosway. Also, Murray Porter, who is not known for his scoring but more for swinging around a wooden stick, also scored on the break.

Not all of the Riverman goals were scored from defensemen. Forwards such as Roger Vyse and Wayne VanEvery scored multiple goals as fellow lefty’s Marty Hill and Randy Martin also chipped in with a goal apiece. The Rivermen are a well-put together team of talent both old and young and should be able to take this series as they play game two on Sunday.

Six Nations have what it takes to win this series outright and go on their way to the finals. They have a handful of players who have seen time in the NLL over their lacrosse careers and a tone of players off last year’s runner up squad.  They are a favorite to win the OLA league as well as the Presidents Cup