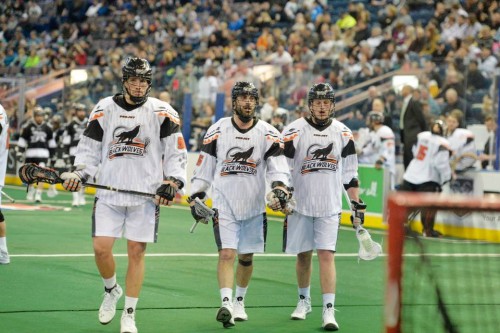 In the Black Wolves’ inaugural season, things started out strong with wins in their first two games.  Unfortunately for New England fans, the Black Wolves would only win two more games before finishing in last place.  The season also ended with Head Coach Blane Harrison resigning due to personal commitments.  This is not to say that things are all doom and gloom for the new franchise.

Even though new coach Glenn Clark is at the helm, the rest of the staff was kept in place, meaning there will still be plenty of continuity to help build upon.  What will be interesting to see is if there are going to be major changes in how the team operates.  The Black Wolves do not have many high draft picks in 2015 to try and build another team.  That means they likely will try to fill some holes and make some upgrades where needed.

The area in which the Black Wolves struggled the most last year was in transition.  Teams like Minnesota were able to run over them by beating them back into their defensive zone and getting easy, uncontested shots.  They also lacked the ability to really push the ball up the floor and score with their defenders still out there.  While both could be solved with coaching and their current players, finding fast forwards who can also play defense should be a priority.  Kevin Crowley did do this quite a bit prior to be traded mid-season as well as Brett Bucktooth.  To support forcing offense in the other direction, Jamie Lincoln started taking more shifts on defense instead of forward as the lefties started getting a little more crowded.  This did allow the Black Wolves to take advantage of mismatches.  Another big piece of this was trading for Andrew Suitor.  While Joel White was the lifeblood of that team on defense and in transition, he only averaged a point per game.  When Suitor is healthy, he can play at any position on the floor, which is huge for a younger team.

Speaking of health, this is a big area of concern for the Black Wolves.  Suitor and Quinn Powless both were unable to finish the season due to knee injuries.  In the offseason, they have also lost Mike Manley and Mike McNamara while the status of a few other players is not entirely clear.  Most of the players should be set to start the season, but coming off an injury often can lead to a slow start, which is nothing that a team in a league this small can really afford.  Trying to build up some reinforcements for these players is likely an area to be addressed through either the draft or free agency.

The final big area for the Black Wolves is finding a physical presence on the crease.  While 5’8″ Kyle Buchanan did a phenomenal job down low on the righty side (finished 3rd on the team is loose balls), they could really benefit from someone who can create more space for their shooters.  Bucktooth played this role for the Stealth with Rhys Duch, but with the Black Wolves, he gradually started being responsible for running the offense from up top as the season progressed.  The result of all this is that the Black Wolves shooters did not finish well this season.  Pat Saunders led the way with shooting only 17% while Garrett Billings finished his eight games with a mere 5.7%.  The east division is too tough to expect any success with numbers like this.

While I don’t think it will be a major area of focus, the Black Wolves tried out several goalies last preseason in camp before trading for Belanger.  I would not be too shocked to see if they take a shot to get a young goalie in once again.

The Black Wolves are definitely going to look to win immediately in the 2016 season.  Being in a new market with a new coach and a relatively young team, they will likely try to keep the moving pieces at a minimum.  But do not confuse the lack of major moves with complacency.  The team wants to make their home in New England permanent, and they do not want to be ending their season early for a second year in a row.  With a deep draft coming up, they still have the chance to either add picks or move up a few spots to get a player they want.  They made some blockbuster trades during the season, so there’s no reason to think they won’t by draft day.