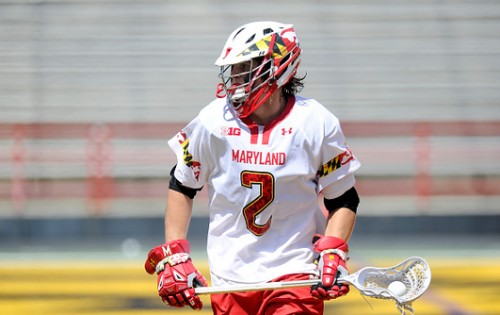 Maryland made it all the way to the championship game, the third time in five years, and John Tillman is looking for his squad to return the title to College Park for the first time in forty years. The last time the Terps won the title, the Philadelphia Flyers were still the Broad Street Bullies. Which shows you the drought they are under with being continually atop the polls in college lacrosse.

Maryland’s offense graduates a number of long time starters and will look to replace them with the advantage of having some veterans shouldering the weight.

Matt Rambo returns for his junior season after leading the Terps in points as a sophomore. This season he should eclipse the century mark for goals in his career, showing that he has been a feature of the offense since he arrived on campus.

Classmate Colin Heacock returns as well, having scored in the championship game. Three highly touted freshmen arrived this fall and look to be major contributors early in their careers. Tim Rotanz came onto campus with high expectations, but started off slowly. This could be the time for his ascension into the starting lineup for Maryland. Curtis Zappala, Louis Dubick, and Timmy Monahan will be competing for the second and third spots behind Rambo, filling the role vacated by Jay Carlson.

Bryan Cole came to the forefront of the Terp offense last year and looks to again be a dominant presence for Maryland. His emergence shifted the focus of the opposition to not weigh so heavily down on the Terp attack unit. If he can continue his efforts, the Terps should again be posed to be a contender.

At the midfield, Henry West looks to be a bigger factor in the midfield. Joe LoCascio graduated and he was a playmakers in the midfield for the Terps. Look for Dylan Maltz to run midfield as well after being moved to midfield during his slow start to last season. Maltz will likely invert again to take advantage of his speed and change of direction.

The midfield has the most holes to fill and without proven scoring, the attack may have to carry a lot of early season weight unless great strides are made during the fall practice season.

Defense has always been a staple of the Maryland program and they return a number of good players. Possibly the best freshman in the nation returns in Matt Neufeldt. He was always on the field, pushing transition, guarding the opposing team’s best midfielder, and Coach Tillman didn’t shy away from using him in key situations.

Virginia transfer Greg Danseglio will bring an immediate intensity and knowledgeable presence to the defense. With Casey Ikeda graduated, he will likely assume the role that Ikeda provided to the Terps. Returning also are Mac Pons and Matt Dunn, both of whom started the National Championship game against Denver.

The question is in goal as Ryan Bernlohr graduated. Bernlohr was the wall of the defense, ending up the season as a First Team All-American. Dan Morris is the most experienced goalie in the lineup, having saw reserve time in 2015. The competition is open to be the goalie of the 2016 Terps.

Maryland looks to make another run to championship weekend in 2016, this time wanting to take home the trophy.