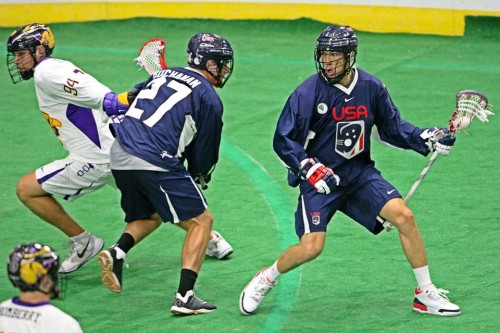 The United States came out strong, keeping their game against the Iroquois close. They then went on to gain two victories over England and Czech Republic. Unfortunately they received the other side of the sword when they went up against Canada and were dismantled by their northern neighbors. Tony Resch’s group sits at 2-2 and looks to make the semi finals.
Ireland has had a strong presence at the WILC’s. They started with two close wins over Germany and Serbia before falling to Israel. They defeated Australia in their last regular pool play to gain a rematch against Israel where they would fall once more. The Irish enter today’s match versus the US with a record of 3-2.
Both leaders for their teams have been around box lacrosse for some time. Casey Powell for the US and Stephen Keogh for Ireland. Powell enters with just 12 points in his two games played while Keogh has 23 in five games.
Joe Walters will be a big force for the Irish defense to stop. The current Knighthawk has been a terror for any defense this tournament. He’s tallied eight goals and 15 assists during his time out on the floor.
Kevin Buchanan, Marcus Holman and Garrett Thul, Jeff Ratcliffe, and Joe Researits have given great support in the points department as well. Joel White has helped the United States tremendously with their transition game tallying eight points of his own.
Brian Gillis is no slouch for team Ireland as he has picked up 21 points this tournament. Kevin Owens, Tyler Roche, Michael Shea, Ben Snider and Drew Wichmann all can put up points as well and have helped Keogh and Gillis get momentum to score with their great supporting roles in their moves on and off ball.
Defensively it will interesting for both teams. There’s fire power on both sides which will test the defenses early. Keogh been known to get rowdy and if the US wants to make this game easy, they cannot bite on the temptation and lose their composure and stay out of the penalty box. The Irish need to stand their ground, be ready for a quick moving US offense and not get lost in the shifting and picks.
Goalies will have a big role tonight as this is a quarterfinal matchup. US goalies Jake Henhawk and Dave Mather have played well this tournament, combining for a .645 save percentage. Michael Cregan has an .82 save percentage for Ireland, making over 200 saves and letting in just 45 goals. Cregan will be tested today with this strong offensive group from the US.
Game time is set for 4:30pm (16:30pm) at the Onondaga Arena. Catch the game live streaming on the WILC website www.wilc2015.com/watch