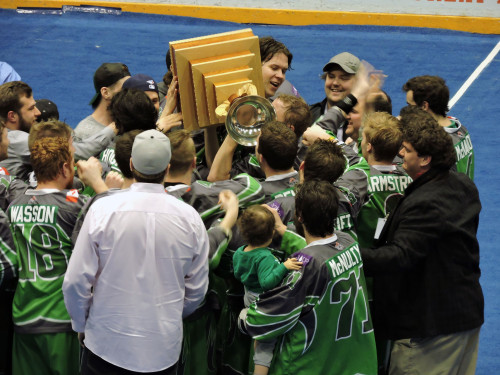 The Canadian Lacrosse League has a new champion for the fifth time in their five years of existence. An 11-9 win by the Durham Turfdogs over the Ohsweken Demons Friday night at the General Motors Centre in Oshawa put the cap on an excellent season for the Turfdogs.

“This is very rewarding,” said head coach Mat Giles. “I think it’s been a lot of hard work the last two years and to win the championship is huge.”

Prior to the game, Giles was named the CLax Coach of the Year.

The Turfdogs made the final on the strength of a 13-12 overtime win over the Barrie Blizzard in a semi-final game. 2016 was their first appearance in the Creator’s Cup. The Demons were making their fourth appearance in the final after a comeback semi-final win over first place Niagara. The Demons won the inaugural trophy in 2012 but lost in 2014 to Niagara and 2015 to Barrie.

Durham, second place finishers in the regular season, was able to host the championship after Niagara was knocked out of contention. The home crowd sure helped in cheering on the Turfdogs to victory. A Creator’s Cup attendance record was set with 648 tickets sold and the GM Centre was buzzing with a lot of knowledgeable lacrosse fans.

Captain Mark Farthing said the Turfdogs weren’t worried about who they would face in the championship game.

“It wasn’t where we were watching, hoping, we were playing one team or the other,” he said. “There are a lot of skilled players on both teams (Niagara and Ohsweken), so we got Ohsweken and they played hard, we played hard, and we were lucky enough to win it tonight.”

Giles said the game plan for Ohsweken didn’t vary much from any other game.

“Overall we tried to concentrate on what we were going to do and didn’t get too focused in on who we were playing against,” he said. “We obviously had to key on some of their better players like Vaughn Harris, but other than that we just tried to play our system and go out and work hard.”

Although they finished fourth this season, the Demons boast some high scoring forwards in Harris (CLax Rookie of the Year), Ian Martin, and Tom Montour, but the Turfdogs defense, great all season, was even better on Friday night limiting quality shots.

Defenseman Pete Rennie, returned from the New England Black Wolves for the game, said the Turfdogs were ready for the Demons.

“Every game in this league, anybody can win on any night,” he said. “At practice we just went through the same thing we always do, obviously [the Demons] shoot the ball a lot so the start of our game plan was to get out on their hands, try to get in the way of as many shots as we could and I thought we did a pretty good job of that.”

Rennie played only four games this season before being called up the NLL. While the NLL is the ultimate goal and he hopes to be back there quickly, Rennie was happy for the opportunity to help win a championship and celebrate with his friends.

“I’ve been here for four years, these are all my boys, and it was nice to be able to come here and get a win with them,” he said.

It helps that a third of the team and the head coach are all from the Peterborough minor lacrosse system; the familiarity helped build a very close knit team this season.

Tied at five heading into the third quarter, Durham opened up a three goal lead but Ohsweken roared back scoring the next three, including two in a row from Chris Attwood, for an 8-8 tie in the fourth quarter. That’s when the Turfdogs broke open the game once again, going on another three goal spree from Thomas Hoggarth at 5:03, Geoff McNulty at 10:50, and Mike Triolo at 11:55, who was in alone after bumping a defender out of the way of the Ohsweken net to beat goaltender Chase Martin.

Two penalties at 14:03 killed any hope of another comeback for the Demons. Wenster Green scored shorthanded at 14:43 to pull the Demons within two but it was too late. Just a few seconds later, the Turfdogs were spilling off the bench to celebrate their win.

Chris Attwood led the Demons with three goals and one assist. Vaughn Harris had two goals and two assists. Ian Martin and Corey Thompson had the other Ohsweken goals. Roger Vyse and Josh Becker each had a pair of assists. Chase Martin was solid in goal, especially in the first half of the game. Martin stopped 54 shots.

For the Turfdogs, Derek Hopcroft only came away with two goals and two assists, but led the Turfdogs in shots and was all over the floor making great plays. Dylan Goddard, named Creator’s Cup MVP, had one goal and five assists. Mike Triolo and Brandon Armstrong each had two goals and one assist. Thomas Hoggarth, the CLax Transition Player of the Year, had two goals while Cody McMahon and Geoff McNulty also scored.

Lukas Coote made 42 saves in the win. Coote didn’t play the first half of the season but came in and played well enough to earn the starter’s role heading into the playoffs.

CLax has a short but emotional season. Each team plays only ten games, so there’s no time to test the waters. You have to be good right away to make a difference. Durham started the season 3-0 before falling to 3-3. Winning three of their last four games, however, put them exactly where they needed to be for their playoff run.

Nobody was happier on Friday night than Farthing, the captain.

“We’ve been battling for a lot of games, a lot of years,” he said. “This group of guys comes together, goes to the rink a lot of times when a lot of guys would prefer not to. This is what we put the hard work in for. A lot of people put a lot of effort into this, right from Mat Giles… right down to the latest guy who joined our team, our trainers, our equipment guys. There’s a lot more to this than you see on the floor.”