We, The Saints, beat the hosting Kahnawake Mohawks 8-5 to win the President’s Cup, bringing a senior title back to St. Catharines for the first time since…. I have no idea. I don’t know history stuff.

So, I write this having poured, in celebration, a good deal of whiskey into my face, which was then absorbed by my stomach, released into my bloodstream, and pumped up to my battered brain. So I apologize in advance if this gets weird or rambly. Forgive me, Llords, for I have sinned.

Reluctantly, I’ll talk about actual lacrosse for a bit here. It feels like, though our offence scored when they had to (but rarely in the first period), this cup was won largely in our end.

We started the week without Ian Llord, Priolo, and Boucher. But before our game on Tuesday, as we got ready to play, we fell into shadow– the sun having been eclipsed by the walking giants themselves as they descended on Quebec- their Major series having ended the night before.

Have you seen the size of Priolo and Boucher? Around them I feel like we’re all in Lord Of The Rings, and everybody but them was digitally shrunk in post-production to make it obvious that we’re a different species of humanoid than they are. Each of their feet is about the size of my car. People think goalies are idiots, but I’d rather take shots off of my throat than be cross-checked and slashed by one of these guys for 2 straight hours each weekend.

We also brought, for defence, two bulldogs named Maz and Atty, who, in one game, ripped apart a terrier that was sent on the floor to rag the ball during a penalty-kill. Cops got involved, and we were ordered to have them put-down after the tournament. We told the kids that we sent them away to a farm.

Anyway, a huge number of non-Saints games had goal totals up in the 20s, as most teams seemed to be insanely offensive. So our scary D did a great job foiling that tactic of the other teams, and keeping most shots-against fairly harmless. I still managed to blow a couple 30-footers, though. That’s my game. It’s in my nature. Can you blame the birds for singin’? That aside, I think I still beat a personal record for save -percentage and GAA, which, probably and sadly, includes my hockey stats. Thanks, gigantic, tree-wielding, D guys– I owe you dinner– like a whole moose, or an entire nursery of babies, or a village of virgins.

Did I mention in the last report how HOT it was in that arena all week?! I’ve never been so wet in my life. I think my teeth were sweating. My THOUGHTS were sweating. I wish I could see documentation of what slowly happened to my body over the course of the week. I bet it would look like a time-lapse video of a decaying raccoon. A human isn’t supposed to stay that wet.

The one semi-final game was between Kahnawake and Caughnawaga (both local) and the arena was packed. The parking lot was so full, that when we arrived for our semi-final, which would immediately proceed this one, I had to park way the hell down the road. There were cars parked on the roof and hanging from trees and stuff, and walking into that barn filled with all those people was like nothing I’ve ever felt before. It was obviously insanely hot, but also the air was soaking wet, and thick, and hard to breathe. There was a great crowd of a zillion people sealing-in all the juices around the death-pit that was the playing-surface. It felt like they were filming a new Mad Max movie. But with stink.

Anyway, unexpectedly to some, Kahnawake beat Caughnawaga in their sweaty thunderdome in the first semi. We beat the Calgary Vampire Farmers for our semi. One dude got almost all of the goals for Calgary. He’s the Calgary version of our Shawn Wilkins, except everything I stated about Shawn in the last blog was a lie.

By the way, if you’re thinking that it could get confusing having a “Kahnawake” and a “Caughnawaga” in the same tournament, you’re not wrong. I was confused pretty much all week about who was who. That being said, I’m probably not the best person to blog about the tournament.

For the final on Sunday, we kept Kahnawake’s talented, and expensive-looking offence fairly subdued to win ourselves the cup. To win the whole bag of snakes. I don’t think that’s a real expression.

Jake Henhawk was not only unreal between our pipes in this game, but all week, and really, all playoffs. He earned himself MVP of the whole tournament. I won “Most Trouble Lifting the Cup With His Skinny, Tattooed Arms”, so I did alright too.

A couple other hilights of the week: Wilkins’ equipment bag was lying at the side of the parking lot, after having been unloaded from our bus, when it was run-over by a mysterious Honda Ridgeline. The driver, none-the-wiser, drove off. Wilky’s helmet was completely crushed into a comical size and shape that you wouldn’t believe unless you saw it for yourself. See attached picture. 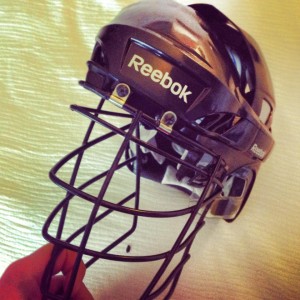 Also, one day after taking a shower in my hotel room, I wrote “I Have Killed Again” in huge letters in the steam on the bathroom mirror. That night, a team-mate of mine met a girl, and took her back to the hotel and into my bathroom for an innocent adult-shower. Of course, the steam from their sins made my message re-appear in the mirror for them to see. That outta creep a girl out.